If X-ray observations of a distant supermassive black hole are what they appear to be, they might end a decades-long debate. 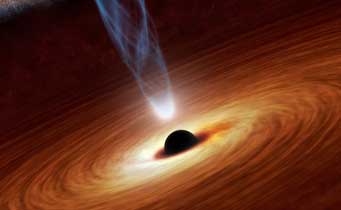 A supermassive black hole's accretion disk is so hot that it glows in ultraviolet. These UV photons scatter off electrons above the disk — perhaps in an atmosphere-like "corona" or in a jet, as shown in this artist's illustration — and are boosted to X-ray energies. In one model, they then reflect off the disk like a flashlight's beam off a spinning CD, eventually reaching our X-ray detectors in space.

Two main scenarios exist for explaining the X-ray signals from these active galactic nuclei, or AGN. Both scenarios have clouds between us and the accretion disk, adding their own fingerprints to the signals. But the first posits that many of the X-rays reflect off the hot accretion disk around the black hole and come to us from there; the second states that the intervening clouds block our view of the AGN’s inner sanctum and shape the X-ray spectrum.

AGN produce X-rays when ultraviolet photons from the hot accretion disk scatter off relativistic electrons just above and below the disk, pumping them up to X-ray energies. In the disk model, some of these X-rays then shoot back at the disk and reflect off it, carrying with them the fingerprint of the strong gravitational effects at work near the event horizon.

In the cloud model, intervening clouds reflect the X-rays rather than the disk, adding multiple layers of absorption that can look like disk emission if properly stacked.

The debate might seem esoteric, but many astronomers depend on the disk model to measure black holes’ spins. Spin carries the history of a black hole and can reveal how the beast grew to its present size. With no disk reflection, real spin measurements are impossible. 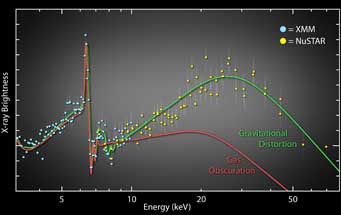 Before NuSTAR, astronomers couldn't distinguish between two scenarios explaining active galactic nuclei's X-ray signals: reflection off the accretion disk (green) and reflection and absorption from intervening clouds (red, one model). If the red line is a correct estimate of what clouds would do — and critics have their doubts — then NuSTAR's observations pin down disk reflection as the proper explanation. Click for larger view.

Guido Risaliti (Osservatoria Astrofisico di Arcetri, Italy, and Harvard-Smithsonian Center for Astrophysics) and his colleagues used XMM and NuSTAR to observe NGC 1365, a spiral galaxy about 70 million light-years away on the border of the constellations Fornax and Eridanus. Previous X-ray telescopes have only been able to focus X-rays below 10 keV in energy. But with NuSTAR and XMM combined the team could observe X-rays between 0.5 and 79 keV, reaching into the high-energy range where astronomers hope to find clarity on which scenario explains their observations.

Risaliti and his colleagues used the two scenarios to interpret observations of ionized iron emission. Reporting in the February 28th Nature, they conclude that the X-rays definitely include reflection from the disk. If that’s true, the shape of the iron emission line directly relates to the size of the innermost stable circular orbit around the black hole, allowing the astronomers to estimate the black hole’s spin: at least 84% of its maximum allowed value, in keeping with previous measurements based on low-energy observations.

Black hole spin can’t be easily converted into speed, says study coauthor and NuSTAR principal investigator Fiona Harrison (Caltech), because we can’t paint a dot on the event horizon and clock how long it takes to orbit the black hole. But we can understand spin in terms of how the black hole’s gravity twists spacetime around it as it rotates. “If you were standing near the event horizon of this particular black hole,” she says, “because your spacetime is twisting, you would be turning around once every 4 minutes just to stand still.”

Such a black hole likely grew through accretion, says Risaliti, although a major merger between two smaller black holes of about the same mass might also work.

Not everyone’s convinced by Risaliti and company’s interpretation. A longtime proponent of the clouds model, Jane Turner (University of Maryland, Baltimore County) doesn’t think the team’s attempt at a cloud scenario is convincing. She explains that the models the team used aren’t valid above 10 keV, so basing the spectral analysis on them doesn’t make sense. She also disagrees with the team’s interpretation of the iron spectral line, saying the cloud model better accounts for the shape than gravitationally-blurred disk reflection. “They have not proved what they claim to have proved,” she concludes.

Risaliti acknowledges that the clouds model is fitted to low X-ray energies and then extrapolated to higher energies, and there’s definitely more uncertainty as a result. But he argues that, in order to explain the signals with just clouds, they’d have to assume X-ray emission from the source is maybe 100 times higher than what’s observed. Having gravitational distortion just makes more sense, he says.

So is the new result a slam dunk? Depends on whom you ask.

Interesting that the X-rays are created by inverse Compton scattering of UV photons - I've always thought that the X-rays were thermally-produced from matter at millions of degrees.

Thanks, Camille, for explaining this one so well. Aside from the difficulty of standing next to the event horizon of a black hole for four minutes, I love Fiona Harrison's word picture about painting a dot on it to illustrate the weirdness of the space-time universe (in which we all live but don't normally realize it.)

What causes the prominent spike at about 6.5 kev, that both models seem to agree on?