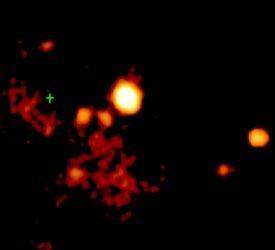 The inner region of the galaxy M82, imaged by the Chandra X-ray Observatory. The brightest source seems to be an intermediate-mass black hole. It is located near M82's center, which is marked by a green cross.

Mother Nature usually forms objects in a continuum of sizes. But until recently, black holes seemed bifurcated into distinct classes: stellar-mass holes containing roughly 5 to 20 solar masses formed by the collapse of stars, and supermassive beasts weighing millions or billions of solar masses, formed by vast amounts of matter pooling at the centers of galaxies. There seemed to be nothing in between.

Over the past few years, however, astronomers have identified
X-ray sources with luminosities and other characteristics expected of black holes that would fill in the gap, containing a few hundred to a few thousand solar masses. But there was a problem. How would such intermediate-mass black holes form?

In the April 14th Nature, an international team led by Simon Portegies Zwart (University of Amsterdam, Netherlands) identifies one possible avenue: stellar collisions in the heart of dense young star clusters. Using the GRAPE-6 supercomputer in Japan, the team simulated stellar motions in MGG-11, a rich cluster in the galaxy M82. A bright X-ray source that appears to be an intermediate-mass black hole lies very close to MGG-11.

In the simulation, gravitational interactions cause high-mass stars to sink to the cluster’s center within 4 million years, before they have a chance to explode as supernovae. The cluster’s core becomes so dense that stars collide and merge, forming a monstrous star with 800 to 3,000 solar masses. "That star quickly collapses to form a black hole of similar mass," says Portegies Zwart. 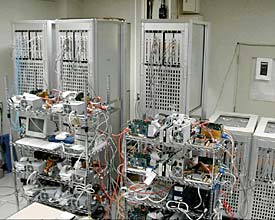 Able to perform 64 trillion calculations per second and optimized to perform gravitational simulations, the GRAPE-6 (GRAvity PipE-6) supercomputer can accurately model the motions of stars in a dense cluster. Astrophysicists recently used it to model the formation of an intermediate-mass black hole.

His group also simulated a more massive but larger M82 cluster, MGG-9, which exhibits no bright X-ray source and is therefore unlikely to contain a midsize black hole. The computer models failed to produce such a black hole in this cluster, even though the clusters have similar stellar densities. In MGG-9, low-mass stars formed a wake behind massive stars, creating a drag force that slowed their motions toward the center.

"The main reason that MGG-9 cannot produce an intermediate-mass black hole via the same process is that the most massive stars go supernova before they reach the cluster center," says Portegies Zwart. "This prevents them from colliding with one another." The clusters are similar, but only MGG-11 has the right combination of stellar density and total mass to initiate the runaway stellar collisions that trigger the formation of an intermediate-mass black hole.