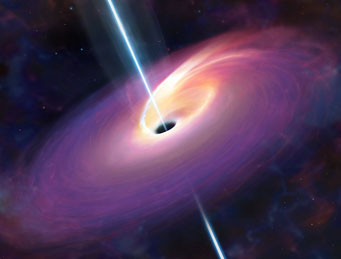 Artist's impression a star being disrupted by a massive black hole. A recent event was cataloged in an unidentified galaxy roughly 4 billion light years away.

A black hole at the heart of an uncataloged galaxy about 4 billion light years away caught the attention of two astronomical teams led by Joshua Bloom (University of California in Berkeley), and Andrew Levan (University of Warwick) when it ripped apart a star and produced a powerful Gamma-Ray Burst (GRB) that was picked up by the Swift Spacecraft on March 28, this year.

The radiation from the cataclysmic event persisted for several weeks, allowing Chandra to record high-energy X-rays and for Hubble to pick up visible and infrared wavelengths as powerful as a hundred billion suns. Astronomers attribute this level of brightness to the fact that the GRB was directed directly at Earth’s face.

Bloom, who published his paper this Thursday in Science Express, said that it was not uncommon for stars to be picked apart by black holes, in a process called tidal disruption. But it was extremely rare to observe such an event, he said.

“We would have to look at 100 million galaxies every year to see at least one event a year,” he commented. In comparison, astronomers can find a supernova by surveying only 100 galaxies and an exploding star’s Gamma-Ray Burst by watching one million galactic systems.