Astronomers have plenty of evidence for small and large black holes, but have had little luck tracking down the mid-sized variety. One team of researchers suggests the search has been focused on the wrong places all along.

If you could visit any kind of body in the universe (assuming you could avoid death by freezing, asphyxiation, or being torn limb from limb by outrageous gravitational forces), what would it be? It'd be fun to see up close a puffed-up supergiant star, or to float through the Horsehead Nebula. But my top celestial vacation destination would have to be a black hole. What could be cooler than a gaping pit in the very fabric of the universe? 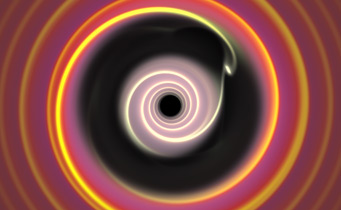 This illustration shows a gas giant like Jupiter carving out a gap in the disc of gas and dust surrounding a star. New science suggests the process for forming middleweight black holes might make similar gaps in the gas clouds around galactic cores.

We know they're out there. There may be as many as a hundred million small, stellar-mass black holes in the Milky Way alone, and astronomers think that deep inside the core of every galaxy with a central bulge — and perhaps some without a bulge, too — lurks a supermassive beast millions or even billions of times the mass of our Sun. But scientists have only indirect evidence for the existence of the middle children: intermediate-mass black holes, or IMBHs.

But don't let that dash your travel plans. A team of scientists based at the American Museum of Natural History in New York suggests that astronomers have simply been looking in the wrong place. Most searches for IMBHs have looked at dense stellar clusters scattered throughout our galaxy. Astronomers have focused on star clusters because black holes need to feed on other objects in order to grow, and star clusters represent a plentiful food source. But however dense these clusters might be, they still contain vast swaths of empty space. Collisions in them — opportunities to feed — are relatively rare.

So where might collisions be more plentiful? Barry McKernan (AMNH / CUNY), a co-author of the new paper published online July 10th in the Monthly Notices of the Royal Astronomical Society, says IMBHs might form around the enormous black holes at the hearts of galaxies much as planets form around young stars.

Gas giants such as Jupiter likely build themselves up by pulling in material from the ring of debris surrounding their fledgling parent suns. Over time, they become more massive and can grab more gas and dust from the disk, until there’s nothing left for them to eat. Black holes might take this method and run with it, McKernan’s team says. Smaller, stellar-mass black holes stuck in the disk surrounding a supermassive black hole might grow into the intermediate variety by consuming stars and other bodies orbiting the central monster. This method could ultimately prove far more efficient than formation in a stellar cluster, the team concludes. 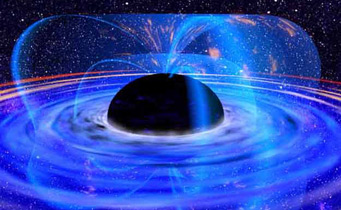 This illustration of MCG-6-30-15, one of the galaxies scientists intend to probe for intermediate-mass black holes, shows the supermassive black hole at the galaxy's center. Researchers theorize that IMBHs spiraling into the galactic core could send gravitational ripples through the universe.

The similarity between planet formation and black hole growth makes the IMBH model seem promising, says Mordecai Mac Low (AMNH), an expert in planetary evolution who was not directly involved with this study or the one last year in which the team first speculated this scenario could happen. The physics is the same in both scenarios, he says. "Everything just scales up in mass."

McKernan says the key to the model is the dense cloud of gas swirling around these supermassive black holes, rather like dirty water swirling around a bathtub drain. The gas drags on any objects floating in it so that they orbit at roughly the same speed and travel in similar, circular orbits. Not only should this uniformity encourage more collisions between caught bodies and the burgeoning IMBH, he says, but the black hole will also be able to feed on the disk’s gas itself. With such abundant sustenance, the seedling should quickly grow into an IMBH.

Future observational evidence for this scenario might also resemble that from forming planetary systems. Once a planet has gathered all the material it can along its orbit, it opens a gap in the disk around its host star, like a moat around a castle. This gap is a telltale sign of a young planet. McKernan's team intends to search for similar — albeit much larger — gaps in the gas disks surrounding supermassive black holes. They have a few targets in mind, such as MCG-6-30-15, a galaxy about 100 million light-years away in the constellation Centaurus. A gap near the galactic core will leave a distinctive imprint on the galaxy's spectrum, says McKernan. It's a signature the team hopes to find with instruments like the Japanese Astro-H X-ray Telescope when it launches in 2014.

These middleweight black holes might also help scientists unravel the mystery of gravitational waves, ripples in spacetime created by accelerating masses. Excellent circumstantial evidence exists for these waves’ existence, but to date none have been directly detected. McKernan points out that, like many baby planets, some IMBHs will migrate inward toward their parent body, and a few might eventually collide with the supermassive black hole they orbit. Just before this impact, the IMBH will be one of the strongest sources of gravitational waves in the sky. If the new model is correct, it could mean current and future projects searching for these phenomena (such as LIGO and eLISA-NGO) might have a chance to finally detect them.

And of course, there’s always the hope of seeing something that doesn’t match predictions by Einstein’s gravity. General relativity has held up flawlessly in the century since its formulation, but astronomers have only begun their plans to test it in the extreme-gravity environments around supermassive black holes. "If there's something deeper out there than general relativity," says McKernan, "following mergers of IMBHs with supermassive black holes will be a great way of looking for it."

It might be interesting to investigate whether a black hole could form through direct collapse -- that is, bypass being a star first.

Perhaps in a massive gas cloud, the collapse could be so fast, that the period of being a star could be skipped or be very short. Then the remaining gas would be drawn into the black hole (perhaps initially very small) causing it to grow to a much larger size.

That’s an interesting question Charlie, but I can think of a few reasons that direct or near direct black hole formation would be very unlikely if not impossible. While there are gas clouds with enough mass for what you suggest, the gas law insures that fusion must occur before the more exotic states of matter (neutron star and then black hole) can be reached. The gas law basically states that Temp is proportional to Pressure x Density, so there would be no way to avoid reaching fusion temperature as the collapse proceeds. Once fusion starts the temp is raised further, producing a back pressure which slows and then halts the collapse and what’s known as the Eddington Effect takes over, wherein in very massive stars the stellar wind is intense enough to halt the in-fall of gas and the mass of the star is effectively capped off. This, together with there short lifetimes, is why stars of more than 100 solar masses are extremely rare.