Most stars that get a second lease on life do so through thievery — or so say two astronomers who think they’ve finally settled a question that’s been around for more than half a century.

“Blue stragglers” have been a mystery since Allan Sandage discovered them in 1953. These are stars that appear deceptively young; they’re hot, bright, and blue compared to the other members of an aged population of which they’re a part. Long after all the other hot, massive stars in a cluster have aged into red-gianthood, blue stragglers continue to burn with the brilliance of extended youth. 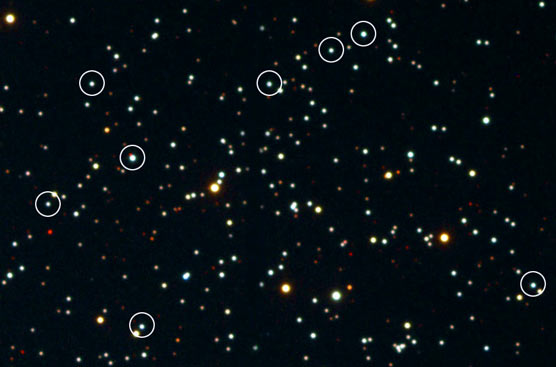 Deceptively youthful stars called blue stragglers are circled in this image of part of the open star cluster NGC 188. Blue stragglers may most often get their new lease on life by stealing mass from a companion star.

Astronomers have proposed three scenarios for how these pretenders could reclaim their youthful glow long after entering middle age. All involve a radical addition of mass, resetting the star’s evolutionary clock back as if to a new birth. Two stars could collide and become one. A binary pair could somehow lose orbital energy, spiral together, and merge. Or one member of a close binary could siphon off most of the mass of a close companion star.

In the October 20th issue of Nature, Aaron Geller (Northwestern University) and Robert Mathieu (University of Wisconsin, Madison) suggest that, for blue stragglers in star clusters, siphoning is surprisingly far more to blame than collisions or spiral-togethers are.

“We've had individual systems that we knew quite a bit about, in quite a number of clusters, but this is the first time we have learned something about essentially all the blue stragglers in a cluster,” says Alison Sills of McMaster University in Ontario, who was not involved in the research.

Blue stragglers can exist solo, but they may also have companions. In this case, the companion’s mass is a red flag on the stellar evolutionary trail, because each origin scenario predicts different ranges for the consorts’ masses. So Geller and Mathieu peered into the open cluster NGC 188 to study 16 blue-straggler binaries and see exactly what kind of buddies the stragglers have.

Although the companions were unseen in visible light, the astronomers detected them and their likely masses from Doppler shifts in the stragglers’ spectra as the stars swung around the hidden objects. The solution that fit the data best put each of the unseen partners at just over half a solar mass, suggesting that they are white dwarfs — cinders left over from dead stars that lost their outer layers.

If the blue stragglers had come from collisions, this average mass would be nearly doubled. In a collision scenario at least three stars are involved, Geller says. That’s because a binary system is a much bigger target for an interloper star to swing at; one-on-one direct collisions are scant at best, especially in a sparse cluster like NGC 188. But three or more stars can “come together and do a longer type of dance with each other,” he says. “As they’re exchanging partners and flying back out and coming back in and doing all sorts of crazy things, sometimes two stars get close enough together that they collide.”

In this case, any leftover companion tends to be on the massive side, because a smaller star is more easily flung out of the system.

That’s not the case with mass transfers. A blue straggler born via siphoning starts out as the less massive star in a binary. “Basically, in a mass-transfer scenario, the reason the one star ends up as a blue straggler is that its companion dumps mass on it,” says Christian Knigge (Southampton University, England), who was not involved with the study but is working with Geller and Mathieu to follow up on their results.

The more massive star burns faster, ages faster, and swells toward red-gianthood first. Being in a close binary, as it swells it spills over its Roche lobe, the region around it where it can gravitationally hold onto its outer layers. “At that point the companion is basically a white dwarf with a big envelope, and it's the envelope that gets dumped onto the about-to-be blue straggler. The end result of the process is a blue straggler with a white-dwarf companion.”

White dwarfs, unlike the main-sequence partners predicted by the collision scenario, fall nicely in the half-a-solar-mass range. The interesting thing about Geller and Mathieu’s result is that the range of average companion masses predicted in NGC 188 is so small: 0.57 to 0.59 times that of the Sun. Knigge says that’s because a white dwarf’s mass depends on its progenitor’s original mass, which in turn corresponds with what type of star is currently reaching old age in the cluster. “Since we know the age of the cluster, we know the mass of those stars and hence can predict the mass of those white dwarfs,” he says. “This also explains why the mass distribution is so narrow.”

Blue stragglers that formed by the third scenario, binary spiral-togethers, can have additional companions looking on, but these would have a wide range of masses. Most would be main-sequence stars, Geller says.

Since Geller and Mathieu weren’t able to see any of the companion stars directly, they couldn’t confirm that they are really white dwarfs. “We don’t see them in the optical because they’re very faint, and especially faint compared to the blue stragglers,” Geller says. But white dwarfs should show up quite well in ultraviolet. The team plans to use the Hubble Space Telescope in late 2012 to look for ultraviolet signals from the companions.

Good R&D! Keep it up!They also may form from debris from supernovas & gas clouds.There may be more gas & dust there than thought.Some being used to form new blue stragglers.Perhaps Dark energy &/or dark matter may also play a apart!Happy Birthday Blues!

Interesting stuff -- thank you. I'd be interested to see the spectra of these stars -- are these images available on-line?

BSS on the H-R diagram have contradicted stellar evolution models since 1953. Perhaps the BSS will turn out to be formed by mass transfer. However, even if white dwarf companions are confirmed for the BSS in NGC 188, it does not show that the white dwarfs were originally red giants and lost mass to the BSS members over millions of years. BSS are found in open clusters as well as globular clusters. What we do observe - stars are aging and dying, e.g. supernovae. The presence of BSS continues to trouble H-R diagram interpretations.

If mass accretion in a binary system were the dominant mechanism for creating blue stragglers, these stars should be present anywhere (and in approximately the same frequency) in the Milky Way, and not just in dense open- and globular clusters. Identifying these isolated blue stragglers would require detailed spectroscopic study of thousands of "young" blue stars. Painstaking work, no doubt, but it could shed some light on the most likely scenario. Any takers?