As the dimmest and coolest stellar wannabes in the galaxy, a class of brown-dwarf stars, called T dwarfs, cling to a thin shroud of mystique. They’re hard to spot, and when astronomers do find them their low luminosities make figuring out their masses and ages difficult.

The T in their name comes from the appended stellar types: OBAFGKMLT, where O stars are the hottest and most luminous, M stars are the coolest and least luminous, and L and T types are substellar bodies — failed stars that cannot sustain hydrogen fusion in their cores. I usually remember the list with “O Be A Fine Girl Kiss Me, Lady Titania.”

I was reading A Midsummer Night’s Dream at the time. 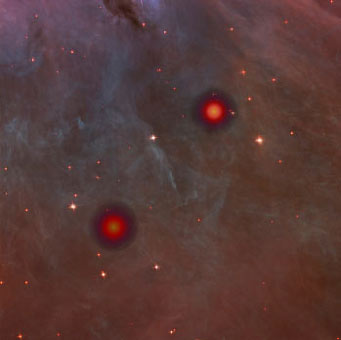 A frame from an animation showing a brown dwarf binary discovered in 2006 by another team of astronomers. The discovery helped to mark the beginning of probing brown dwarf binaries in depth.

Astronomers’ knowledge of T dwarfs has just received a boost. A team led by Michael Liu of the University of Hawaii has determined various physical properties for a pair of orbiting T dwarfs, challenging current models for cool atmospheres and providing new fodder for theorists. The team combined existing data from the Hubble Space Telescope and their own ground-based adaptive-optics observations for the calculations in the paper that will appear in the Astrophysical Journal.

The system, 2MASS J15344984–2952274AB (hereinafter called 1534–29AB), is a field binary, which means that it doesn’t appear to be associated with other clusters or star-forming regions. With no neighbors to compare the dwarfs to, calculating its age is tricky. Precise mass and luminosity values, as well as theoretical models on how brown dwarfs cool, allowed Liu and his colleagues to pin down an age of less than 1 billion years. That’s really young: the Sun is 4½ billion years old, by comparison.

The dwarfs are both around 30 times Jupiter’s mass, well below the limit separating true stars from substellar dwarfs. But given these sizes, the dwarfs' temperatures are 100 kelvins lower than expected. Confident in their values, the team thinks this discrepancy indicates a small overestimate in current models. Others agree.

“It is indeed quite an excellent result, and in fact likely a harbinger of results to come as more of these close binary systems are found and tracked,” writes Adam Burgasser (MIT), who previously studied 1534–29AB.

Both Liu and Burgasser think the information garnered from binary dwarfs will “provide real empirical tests of the brown-dwarf theory” and help astronomers tweak models of ultracool atmospheres. Looking at the dregs of stellar society may also help astronomers understand the stellar population as a whole.

The old spectral class phrase works better this way: "Oh Be A Fine Girl (or Guy) Kiss Me, Lips & Tongue".

That is a great way to remember the spectral classes! Love it!