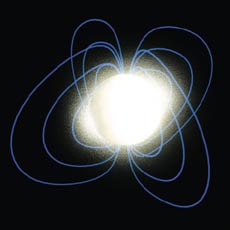 An artist depicts a neutron star. These objects are the dead cores of stars that exploded as supernovae. They cram more than a Sun's worth of mass into a ball only about 20 kilometers (12 miles) across, achieving extraordinarily high densities. Powerful magnetic field lines (blue) thread through these objects. Recent observations show that large numbers of neutron stars emit sporadic, powerful bursts of radio waves for reasons that remain a mystery.

Astronomers have become accustomed to exotic and extreme behavior from neutron stars. But even the wildest dreams of the most imaginative theorists failed to anticipate the latest discovery. In a paper accepted for publication in the journal Nature, an international team has announced that a huge number of these ultradense stellar remnants emit sporadic but extraordinarily powerful bursts of radio waves. These bursts last mere fractions of a second, but during that fleeting interval they are among the brightest radio sources in the sky, even outshining the Sun.

The discovery has sent theorists back to the drawing board as they try to figure out what could cause these outbursts, and perhaps more important, where these objects fit into the evolutionary sequence of neutron stars. "At present the answers are far from clear," concedes Robert C. Duncan (University of Texas, Austin), a leading neutron-star theorist.

The bursting neutron stars were discovered serendipitously by an international team of radio astronomers led by Maura A. McLaughlin (University of Manchester, England). Her group sifted through data taken at the 64-meter Parkes radio telescope in Australia from 1998 to 2002. The team was looking for pulsars, neutron stars that emit regular, periodic pulses of radio waves as they spin. Besides finding lots of pulsars, the team's computer algorithm identified 11 bursting radio sources coming from various directions near the galactic plane. The team spent the next three years observing the sky coordinates of these objects to confirm the discovery and to measure their properties. 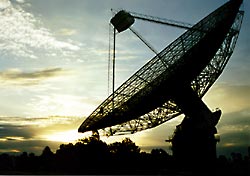 The 64-meter Parkes Observatory dish in Australia is one of the largest radio telescopes in the Southern Hemisphere. Astronomers discovered the bursting neutron stars using this antenna.

On average these bursting objects are invisible for all but 0.1 to 1 second per day, which explains why they were not discovered earlier. The bursts last between 2 and 30 milliseconds, with intervals between bursts ranging from 4 minutes to 3 hours. Previous astronomers might have interpreted such signals as radio interference.

The group found periodicities for 10 of the 11 sources, falling between 0.4 and 7 seconds. This regularity strongly suggests (but does not prove) that the radio bursts come from rotating neutron stars. McLaughlin's team has affectionately named these objects RRATs, short for Rotating RAdio Transients.

During the bursts, the RRATs are the brightest radio sources ever observed except for giant radio pulses observed from the Crab Nebula pulsar and another pulsar named B1937+21. Given the short duration, the source objects probably emit these radio bursts in narrow beams from small areas tied to the stars' surfaces or magnetospheres. But the exact cause of the bursts remains unknown.

Given their transient nature, RRATs are extremely difficult to study, which means astronomers can engage in little more than informed speculation until further information is available. One of the RRATs has spin properties that resemble those of a class of highly magnetized neutron stars known as magnetars. These observations indicate that at least some highly magnetized RRATs are at most a few tens of thousands of years old.

But two other RRATs have rotation characteristics that suggest they are middle-aged, like ordinary pulsars. This, in turn, indicates that RRATs have a wide variety of properties.

Knowing the spatial coverage and sensitivity of the Parkes data, and the ephemeral nature of the sources, McLaughlin and her colleagues estimate that there could be roughly 400,000 RRATs in the Milky Way Galaxy, which means they would outnumber the familiar radio pulsars by a ratio of about 4 to 1.

The existence of so many RRATs might help explain the longstanding mystery of why relatively few supernova remnants have associated neutron stars. Neutron stars are created in the explosions, but unlike the famous Crab Nebula, for example, more than half of known supernova remnants have no observed pulsars. "I don't find it too outrageous to think the majority of neutron stars are born in a very different state than the Crab pulsar, and it is these objects that could make up the parent population of these RRATs," says David Helfand (Columbia University), a leading neutron-star observer.

Over the next few decades astronomers should learn much more about RRATs as they build new wide-field radio-telescope arrays, such as the Square Kilometer Array (SKA). The SKA could discover tens of thousands of RRATs.

Besides picking up many more RRATs, these telescopes might also discover entire new classes of radio-emitting objects. "The transient radio sky is relatively unexplored," says Joseph Lazio (Naval Research Laboratory), who codiscovered a bright, bursting radio object near the galactic center that was announced earlier this year. The nature of that source has not yet been explained.

Neutron Star Found in Supernova 1987A 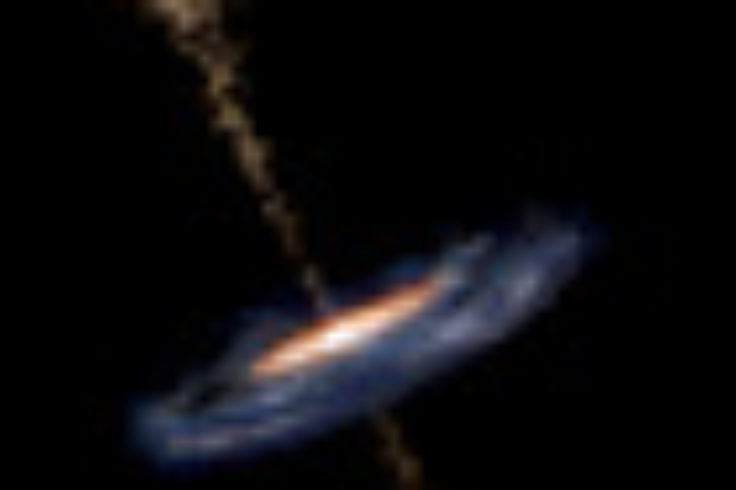 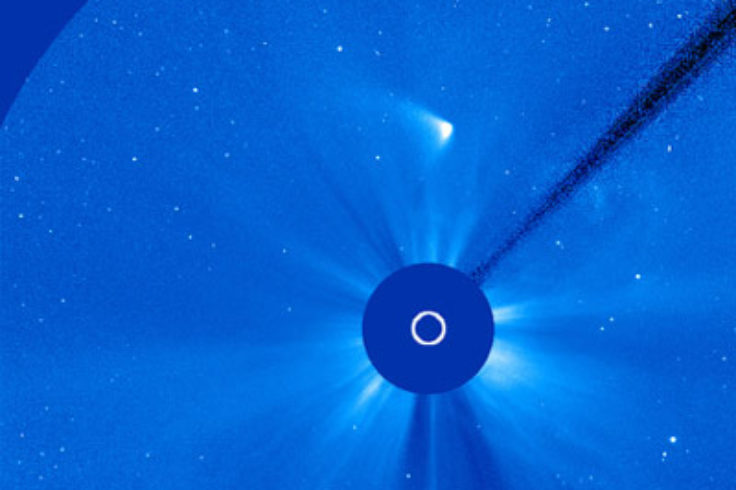