Can Magnetism Save a Vaporizing Planet?

Do planets around other stars have magnetic fields? It may seem an esoteric question, but life as we know it — at least terrestrial life — could not survive on Earth without the magnetic umbrella that protects us from an onslaught of hard solar radiation. 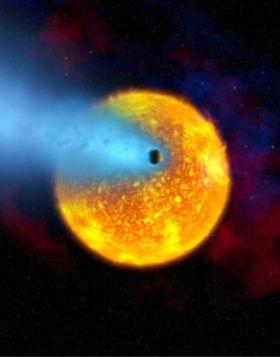 Throw in a magnetic field, and the fate of the "evaporating" planet HD 209458b gets foggy.

Now it appears a planet that is light years from our own may be depending on a magnetic field for its continued existence.

The planet in question is HD 209458b. Admittedly, it's more of a serial number than a name, but to astronomers it's one of the most infamous handles in the galaxy.

HD209458b caused a sensation back in 2003 when astronomers using the Hubble Space Telescope discovered a vast envelope of hydrogen gas and other atoms surrounding the planet. This was a shock because HD 209458b is also a "hot Jupiter". Although it is a gas giant planet, it is less that 1/20th the distance from its star that Earth is from the sun. At such close quarters, any gas lying beyond the planet's immediate atmosphere should quickly be torn away. Thus, the existence of a large gaseous envelope suggests a situation that is both temporary and terminal: a planet evaporating before our eyes.

Type HD 209458b into Google, and you'll find plenty of references to its apparent doom, including the nickname Osiris, the Egyptian god of the afterlife. One group came up with the term "chthonian planet" to describe what you get when a gas giant planet is whittled down to its rocky core — the assumption being that HD209458b is on its way to becoming just such a place.

Now Phil Arras and colleagues at the University of Virginia have another idea. They've been working on the question of what a magnetic field might do in such a circumstance. Given that our own Jupiter has a very strong magnetic field, it's not a stretch to imagine HD 209458b has one too. Arras reasons that a strong-enough field would be very effective at trapping any ions that surround the planet. Instead of escaping forever, they would be directed toward the planet's magnetic poles — quite possibly creating spectacular aurorae in the process. To top it off, because the planet is so close to its star, that big envelope of gas must be thoroughly ionized — and therefore thoroughly magnetized — by the heat.

The picture this leaves us with is a planet that travels around embedded in a cloud of hot, ionized fog. The ions fill up the planet's magnetosphere like smoke in a bottle, but they're not stripped away. There's no need to explain why the planet is evaporating, because it isn't. "If you heat up a planet's atmosphere, then its gas can begin to flow out to infinity," says Arras. "But when you add a magnetic field, the gas is trapped."

This is not the first or even the best evidence that exoplanets can be magnetized. For Evgenya Shkolnik, the magic number that brings back the thrill of discovery is HD 179949. In 2003 she and Gordon Walker of the University of British Columbia published evidence that this star has a bright spot that moves around its surface ever three days, keeping perfect time with a hot Jupiter-sized planet that's orbiting with the same period. Their conclusion is that as the planet barrels through the star's atmosphere, or corona, its magnetic field is continually triggering the release of energy within the star's much stronger magnetic field. This energy is transferred down to a region near the star's surface, forming a hot spot that follows the planet, like a mobile, never-ending solar flare.

This kind of magnetic communication between planet and star had been predicted by others but it was Shkolnik and Walker who first saw it in action. "It was tremendously exciting," Shkolnik recently told me when she recounted the story.

But the effort has not stopped at simply looking for evidence of planetary magnetic fields. "If a planet has a magnetic field then we can start inferring things about its internal structure," says Shkolnik, who is now based at the Carnegie Institution of Washington.

More than a half century ago, two of Shkolnik's predecessors at Carnegie, Bernard Burke and Kenneth Franklin, accidentally discovered the first known magnetic field around another planet. In 1955, using an early radio array made up of wire strewn across a farmer's field on the north shore of the Potomac River, the pair set about scanning the skies for signs of radio waves from distant stars and galaxies. What they got instead — to their surprise and everyone else's — were regular bursts of static from Jupiter, which happened to be high above the horizon at the time. These proved to be telltale emissions from electrons trapped in Jupiter's magnetic field.

A generation later, the magnetic personalities of other, more distant Jupiters are beginning to reveal themselves. The prospect of finding another Earth, complete with its own life-protecting magnetic field, could be just over the horizon.