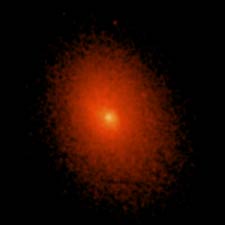 An X-ray image obtained by Chandra of the Abell 2029 cluster is dominated by emission from hot hydrogen gas. The cluster's huge gravitational field compresses and heats the gas to 100 million degrees.

Using data from NASA's Chandra X-ray Observatory, astronomers have independently confirmed that the universe is dominated by dark energy — the enigmatic repulsive force that is causing the universe's expansion to accelerate.

Steve W. Allen (Cambridge University, England) and his team of astronomers had Chandra look at 26 distant galaxy clusters sporadically over a period of four years. They found, as expected, that most of the observable matter in the clusters is in the form of 100-million-degree gas that glows in X-rays. The clusters also contain dark matter, which outweighs the observable matter by about seven to one — judging by the strength of gravity holding the hot gas together.

Astronomers know from other studies that clusters throughout the universe have a uniform ratio of 85 percent dark matter to 15 percent observable matter. This ratio, however, depends on what distance to the cluster is assumed. Armed with the knowledge that the ratio should come out to 85 parts dark matter to 15 parts observable matter, Allen's team worked backward to calculate the distance to each cluster. Distance measurements like this that don't depend on redshift can be used to track changes in the cosmic expansion (i.e. redshift) over time. 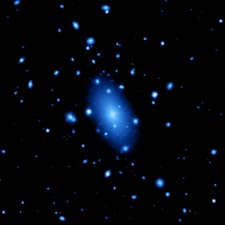 The team's data confirm what other studies have shown: The expansion of the universe slowed down in the period after the Big Bang, then began to accelerate about 6 billion years ago. This acceleration is the hallmark of dark energy, which acts like a repulsive force, pushing everything apart. The new observations provide a third line of evidence for dark energy, adding to the case made through Hubble Space Telescope (HST) studies of supernova distances and observations of the cosmic microwave background using the Wilkinson Microwave Anisotropy Probe (WMAP).

The X-ray study suggests that dark energy makes up somewhere between 67 and 76 percent of all the "stuff" — matter and energy — in the universe. Most of the rest is dark matter, with ordinary matter making up the last 4 percent.

The study also confirmed that the density of dark energy is either constant or changing only very slowly with time, something that recent supernova studies also indicate. That has profound implications for the fate of the universe, as increasing dark energy density would lead to a "big rip" in which galaxies, stars, and even individual atoms would be torn apart. The X-ray data agrees with the supernova and microwave data, which rule out a big rip for at least the next few tens of billions of years.

"We're really only just beginning to gather clues about the nature of dark energy using satellites like Chandra, WMAP, and HST," said Allen at a news conference on May 18th. He added that the team will continue to gather observations of galaxy clusters in the hope that they will help to refine our understanding of precisely how dark energy evolves over time.