The 28th annual Winter Star Party took place February 20th to 26th under the pristine skies of the lower Florida Keys. This year's event, held as usual at the Girl Scouts' Camp Wesumkee on Scout Key, featured unusually warm conditions (even for Florida) and clear skies most nights. 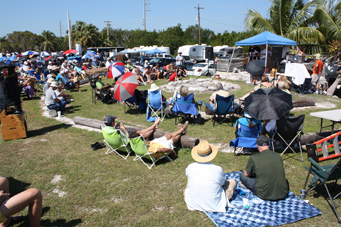 Attendees at the 2012 Winter Star Party gather at their camp's fire pit for the door-prize drawing on Friday afternoon.

For me, there's nothing like exploring the winter sky's showpiece targets while dressed in shorts and a T-shirt, rather than my usual cold-weather gear! Attendees were treated to spectacular views of the globular cluster Omega Centauri, the Centaurus A galaxy, and occasional glimpses of the Eta Carinae nebula — southern-sky splendors that are usually beyond the reach of mid-northern residents.

WSP founder Tippy D'Auria kicked off the event Monday afternoon at the camp's fire pit by sharing stories of his observing highlights and difficulties. Later in the week veteran skywatcher and author Stephen James O'Meara gave a fireside chat that recounted many of his observing and volcano-exploration adventures. 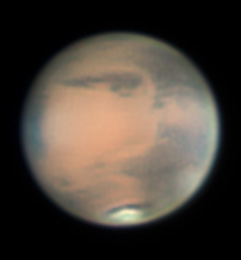 As proof of the clear steady skies enjoyed at 2012's WInter Star Party, here's an image of Mars shot at 2:36 UT on February 25th with a Celestron 14-inch telescope.

During daylight hours, attendees could escape the heat while attending presentations from speakers representing all aspects of our colorful hobby. This year featured an informal imaging workshop, at which experienced astrophotographers related their experiences and offered suggestions to others starting out in the hobby.

I gave a talk titled "Exploring the Hydrogen Sky: Turning Pretty Pictures into Real Science," which detailed a large-scale mosaic project I undertook with fellow S&T editor Dennis di Cicco. Among the talks I attended were "The Politics of Space Exploration" by Mike Reynolds, "Spectroscopy for Everyone" by Tom Fields, and "Mars at the Winter Star Party" by premier planetary astroimager Don Parker.

(Speaking of the Red Planet, seeing conditions were exquisite most evenings, offering great views of Mars near its best for 2012.) 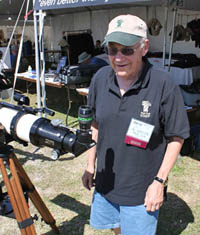 A great feature of the WSP is the Young Astronomers' Camp led by Bob Summerfield of Astronomy To Go, who provided a variety of astronomy activities for young attendees to encourage continued interest in our exciting hobby.

Major astronomy vendors included Tele Vue, DiscMounts, and Explore Scientific. They and other dealers showed off some of their latest wares designed to enhance our observing experience.

If you haven't experienced the "latitude adjustment" of the Winter Star Party, consider reserving your place for next year's event, which will be held February 4th to 10th.

Wish I could have gone to the Winter Star Party this year instead of last year's Windy Star Party. At least the 2005 WSP was good. Very clear southern horizon that year, which I hear is rare.

Awesome post! It's very interesting! I am new to astronomy, but it is certainly something I am passionate about! I love hanging out at night around the fire pit and gazing at the stars. I am hoping to get a telescope with my next paycheck! I am very excited!