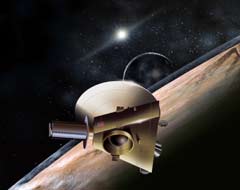 The proposed New Horizons spacecraft will never make it to Pluto and the Kuiper Belt if Congress approves President Bush’s NASA budget for 2003. Development of nuclear space propulsion, however, gets a big new push.

The Bush administration’s budget proposal for NASA, released this week, contains some surprises as well as some familiar features. Funding for space science does well, increasing 19 percent for fiscal year 2003, but projects to explore the outer planets are slashed. The biggest surprise is a proposal to revive nuclear propulsion as a major means of space exploration.

"We must recognize that this is a positive budget," said Louis Friedman, executive director of the Planetary Society, the world’s largest space-advocacy group. "However, we are disappointed at the loss of the Pluto mission."

The Pluto–Kuiper Belt flyby and a planned Europa orbiter both get axed under the new plan. In a letter to planetary astronomers, Wesley T. Huntress Jr. said the administration felt "that the Outer Planets line had been performing poorly to cost and had no clear articulation of priorities."

Dropping these missions allowed the administration to propose a new line called New Frontiers. As with the existing Discovery line (small, narrowly focused, relatively cheap missions that included NEAR-Shoemaker and Mars Pathfinder), calls for proposals will be open to government, industry, and academic institutions and subject to competition. Costs will be capped at $600 million apiece, twice the Discovery limit.

The outer-planets cuts also made way for the most surprising item in the new budget: a five-year plan to study nuclear propulsion. Nuclear electric and ion drives could enable faster travel to distant planets with more power to run equipment onboard. "Nuclear propulsion will make missions to the outer planets as easy as missions to the inner planets," said Kevin Marvel, deputy executive director of American Astronomical Society. Still, nuclear power raises questions about safety and reliability. The Bush budget specifically delays the 2007 Mars Smart Lander mission until 2009 in order to include a nuclear-powered, long-duration rover.

Meanwhile, the Bush administration continues to endorse funding the trouble-plagued International Space Station (ISS) at a "core complete" level, maintaining a stripped-down three-astronaut presence. Funding for some materials-science research in orbit has been curtailed. Otherwise "the science funding that was online is secure and okay," says Marvel. But whether much science can actually be done on the cutback-prone station remains a matter of debate. "Now they have a space station that serves no purpose, and they endorse that," remarked Friedman.

The Bush proposal next goes to Congress, whose members have long supported the ISS and recently reaffirmed funding the Pluto-Kuiper mission. Whether Congress will continue to back the popular Pluto project or restore payments enabling ISS science is an open question.