Despite Saturday's massive earthquake in central Chile, and the considerable loss of life that ensued, there is at least some good news to report. Several Chilean friends have e-mailed me to report that the major professional and amateur observatories have escaped damage and remain operational. 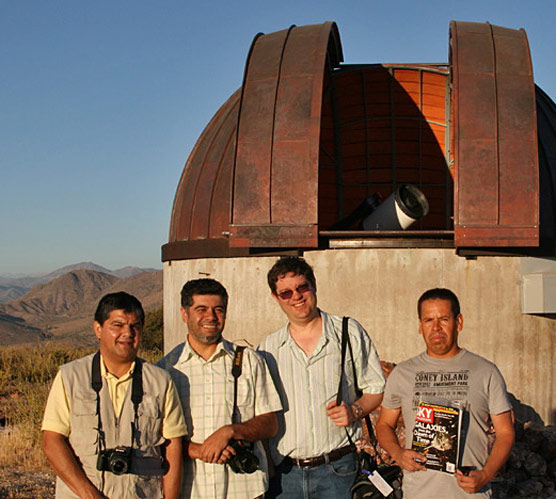 S&T editor Robert Naeye (second from right) poses with Chilean amateur astronomers (left to right) Manuel Ibacache, Rodrigo Marin Baez, and Jose Alvarez in front of one of the four main telescopes at the Observatorio Cruz del Sur (Observatory of the Southern Cross).

There are two reasons why the major observatories escaped damage. First, they are well constructed, built to withstand earthquakes. Second, the largest observatories are situated in northern Chile and were thus many hundreds of miles away from the quake's epicenter near the city of Concepción.

This tragedy has affected me personally because I visited Chile for a week in early December. While there I toured two major amateur observatories and several professional telescopes. This trip was the subject of my Spectrum column for the April issue of S&T. I had the opportunity to meet many leading Chilean amateur astronomers, and I have remained in contact with them since my trip. After hearing of the earthquake I sent e-mails to several of them, and the responses I'm now getting indicate that the observatories are fine, and that everyone I met is safe. This has been a tremendous source of relief.

Eric Escalera, a staff astronomer at the Observatorio del Pangue, reports: "In Vicuña we are fine, because the earthquake was much farther to the south, although it is distressing to see that so many people disappeared. None of the great observatories have been damaged, so all the people you met are fine." 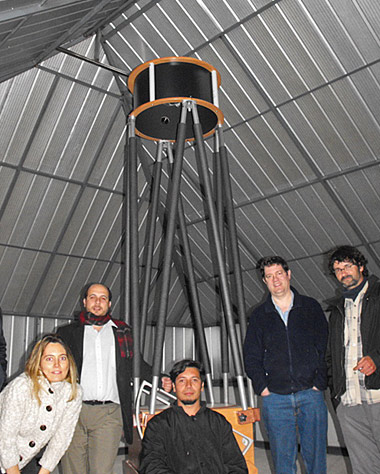 Daniel Luna, who lives near the north-central port city of La Serena, reports: "Here we are okay, the earthquake affected five regions of Chile, from Santiago to the south. It has been a dramatic fact, very chaotic and worrying. But fortunately we are all fine, even the observatories. Because Chile is a seismically active country, our observatories must be prepared for that. So the telescopes are designed to swing when there's an earthquake."

Despite this good news, the thoughts and prayers of the S&T staff go out to the people of Chile and Haiti. We wish them a speedy recovery from these disasters. And despite the tragic earthquake, Chile remains a wonderful place for astro-tourism, especially because the regions of greatest interest to amateur astronomers are in northern Chile, which suffered minimal or no damage from the quake.

To view photos from my December 2009 trip, which include major amateur and professional observatories, visit my personal Chile photo web gallery.

If you are in the corner and have got no money to go out from that, you would have to receive the business loans. Just because that should help you emphatically. I get car loan every year and feel good because of it.

If you are in the corner and have got no money to go out from that, you would have to receive the business loans. Just because that should help you emphatically. I get car loan every year and feel good because of it.