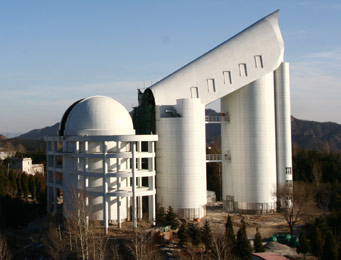 Spectroscopic sky surveys such as the Sloan Digital Sky Survey have revolutionized astronomers' understanding of the cosmos. Now China looks to contribute in a major way to spectroscopic discoveries with the unveiling of its new Large Sky Area Multi-Object Fiber Spectroscopic Telescope (LAMOST). After undergoing various tests in May and June, the instrument earned its initial seal of approval on June 29th from the Chinese Academy of Sciences. The full system will be approved at a later date.

The 4-meter telescope obtained its first spectrum on May 28th, and on June 18th a small system containing 250 fibers, 1 spectrograph, and 2 CCD cameras observed 123 spectra simultaneously. When it's fully operational, the telescope's 4,000 fibers will take that many spectra at once, the highest spectrum acquisition rate on Earth. The Schmidt telescope has a 5° field of view and can obtain good spectra of objects as faint as magnitude 20.5. The project's engineers expect it to be online around August 2008.

LAMOST is located at the Xinglong Observing Station, about 960 meters (3,150 feet) above sea level in the Yanshan Mountains. The Chinese Academy of Sciences facility is open to the entire Chinese astronomical community.