Astronomers may be closer to pinpointing the cause of a supernova that lit up Chinese skies in the second century AD. That “guest star” is thought to have turned into RCW 86, a southern-sky supernova remnant less than 2° from Alpha Centauri.

But the kind of explosion that created this glowing shell has been up for debate. Was it a core-collapse supernova, the kind that throws off a single star’s outer layers and leaves behind a neutron star or black hole? Or was it a Type Ia supernova, the explosive death of a white dwarf when it accumulates too much matter and exceeds its strict mass limit? Using observations from the Spitzer Space Telescope and the Wide-Field Infrared Survey Explorer, Brian Williams (North Carolina State University) and his colleagues now argue for the latter. Moreover, they conclude — as others have previously — that the supernova went off in a low-density bubble, explaining the remnant’s peculiar characteristics. 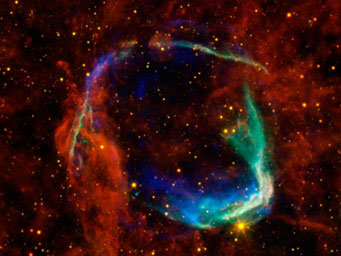 Data from four telescopes reveal the details of RCW 86, the remnant of a supernova that graced Chinese skies for eight months in the second century AD. X-ray and infrared observations now suggest the supernova was an exploding white dwarf.

The white-dwarf argument, to appear in the November 10th issue of the Astrophysical Journal, isn’t a slam dunk. It’s more of an Occam’s razor: a Type Ia inside a cavity is the simplest explanation for the observations. Williams’s team bases its conclusion on chemical fingerprints in the remnant and on the observation that no neutron star or black hole was left behind. The latter point is the more convincing, says Jacco Vink (Utrecht University), who co-suggested a bubble scenario in 1997 but wasn’t involved with the current study.

The bubble explains two oddities of RCW 86: its size and its disparate expansion speeds. Assuming that it’s about 8,000 light-years distant (another point of contention), the remnant is a couple times bigger than expected if triggered in AD 185. Furthermore, this oversized shell is growing faster on one side than the other. Measurements of the shock wave’s outward speed on the northwest and southwest sides come in at 550 to 650 km per second. But on the northeast side, it’s more like 6,000 km/s — 10 times faster.

He and his colleagues conclude that the supernova went off in the bubble’s southwest section. That way, the shock on that side has already made it through the low-density material and hit the cavity’s wall, where the 250-times increase in density slows the wave down. This conclusion matches that made by Vink’s team in 1997, which estimated densities using emissions from the region.

Divining the type of stellar explosion is the key question. Williams’s team argues that the elements they see in the remnant are characteristic of a Type Ia blast more than a core-collapse (Type II) supernova. First, there’s the signal from neutral material around the shock region. Core-collapse supernovae often “flash ionize” their surroundings, so large amounts of nonionized material are more typical around white-dwarf gravesites. But a core-collapse supernova going off in a bubble might encounter enough material at the edge to give off similar spectra, Vink notes.

What may be the smoking gun is the abundant iron the team detected. “Generally speaking, Type Ia supernovae create a whole lot of iron and not a whole lot of anything else,” Williams says. Elements such as carbon and oxygen don’t show as strongly in spectra from white dwarf deaths as they do for core-collapse supernovae, which generally don’t produce much iron. “Typically you see 100 times more iron in relation to oxygen from a Type Ia than you see in a core collapse,” he explains. “It’s a pretty huge difference.”

Vink isn’t totally convinced. He says the iron isn’t as ionized as it should be. “Quite frankly, I am still puzzled by it. Why is all the iron in this low-ionization [state]?” Pockets of neutral iron atoms exist, yet there’s no sign of highly ionized ejecta from the explosion’s outer layers. “This does not invalidate the arguments of the authors,” Vink notes, “but [it] makes me worried that we do not completely understand RCW 86.”

There are other lingering questions. First, did the white dwarf create the bubble itself? As the white dwarf must have stolen material from its companion star (drinking itself to death, if you will), it could have created a thick envelope around itself — a bubble later blown outward by the white dwarf’s own radiation. While this scenario has been bandied about since 1996, a 2007 study found no evidence of such cavities around Type Ia remnants.

Second, what happened to the white dwarf’s companion star? Unless the cavity was created coincidentally by a now long-gone star nearby, Williams says the white dwarf’s donor should still be somewhere inside the remnant. “In 1,800 years it just can’t have moved that far. I mean, stars just don’t normally move that fast.” Finding that star, or a hiding neutron star, should decide the argument. “It’s going to be a tough thing for people to do,” Williams says, “but I hope it will be done.”

If this is within a few degrees of Alpha Centauri isn't that low for observations from China?

Rwinrich: a good question. the study's authors note that the "maximum unrefracted altitude of RCW 86 as seen from the
city of Luoyang, China, was 2.3°" and that, because it was so nearby and thus very bright, it would have appeared to be magnitude 0.3 -- easily observable.

Not only that, you need to factor in precession as well. The location of RCW 86 would have been visible from more of China in AD 186 than it is currently in 2011. So from Luoyang today, RCW 86 would not be visible at all for it will always remain below the local horizon.

I am very new at this site or any science site. However, I'm wondering about the sentence in your report:

"Assuming that it’s about 8,000 light-years distant (another point of contention), the remnant is a couple times bigger than expected if triggered in AD 185"

Technically, if the explosion was observed in 185 CE, and the star was 8,000 light years away, doesn't that mean that the actual event was "triggered" 8,000 years before that, around 7815 BCE?

I apologize if my ignorance is showing 😉