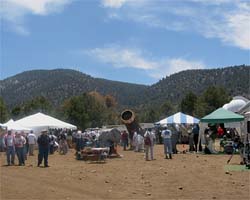 Some 1,700 astronomy enthusiasts flocked to Camp Oakes outside Big Bear, California, for the annual RTMC Astronomy Expo held May 23–25, 2003. A 36-inch Dobsonian telescope (center) shared the main observing field with scores of other instruments and some of the 90 tents under which vendors hawked their wares.

The 35th annual RTMC Astronomy Expo was held May 23–25 under clear skies outside Big Bear, California. More than 1,700 astronomy enthusiasts from the US, Canada, Mexico, Austria, and Taiwan participated in the gathering at Camp Oakes, above 7,000 feet (2,100 meters) elevation in the forested mountains near Big Bear Lake. The star party featured vendor exhibits, lectures, panel discussions, beginners’ activities, and daytime and nighttime observing.

The theme of this year’s event was "Building Your Own Observatory." Nearly a dozen guest speakers told a sometimes standing-room-only crowd about how they constructed their "dream domes." Rick Fienberg, editor in chief of Expo cosponsor Sky & Telescope, showcased eight backyard observatories built by the magazine’s staff: two domes, three roll-off-roof buildings, and three other unique structures. He noted that whatever design you adopt or invent, the convenience of having your telescope ready for use at a moment’s notice is well worth the effort and expense of construction. "I’ve done more observing in the three years since I built my observatory," he said, "than in my previous 30 years as an amateur astronomer." 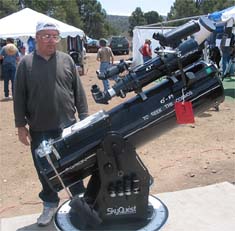 Mike Rogers of Bakersfield, California, displayed his modified 10-inch Dobsonian at 2003's RTMC Astronomy Expo. A 4.7-inch refractor and 10 x 50 binoculars are piggybacked atop the main reflector so that three people can observe the same object at once at different magnifications.

The star party formerly known as the Riverside Telescope Makers Conference has long been known as a proving ground for new telescope-making ideas. This year was no exception. Mike Rogers of Bakersfield, California, delighted onlookers with his multi-tasking 10-inch (250-millimeter) f/5 Dobsonian. The scope carries a 4.7-inch f/5 refractor piggybacked on top, as well as 10 x 50 binoculars on an elevated tangent arm. All are coaligned so that three observers can view the same object at once though different apertures. Jim Stevens of Sedona, Arizona, displayed his 10.1-inch f/4.6 rich-field travelscope, which breaks down into a small cube that weighs only 9 kilograms (20 pounds) and fits into the overhead bins of most commercial jetliners. And 13-year-old Gina McFarlane of Ventura, California, proudly displayed the low-maintenance 4½-inch f/10 Dobsonian that she built with her dad, Gil. The aperture end of its cardboard tube is fitted with an optical window that holds the telescope’s secondary mirror in proper alignment and keeps out dust.

Attendees enjoyed mostly clear skies and moderate temperatures, especially on Saturday. As twilight descended, a brilliant flare from an Iridium satellite kicked off a busy night’s observing with telescopes of all shapes and sizes. Lines formed behind new instruments unveiled by several manufacturers, including 5- and 6-inch refractors from Tele Vue and Stellarvue, respectively, and 14-inch Schmidt-Cassegrains from Meade and Celestron (the latter on the company’s new CGE mount). Not surprisingly, the longest line was seen snaking around the 36-inch Yardscope set up by Bob and Lisa Summerfield of Astronomy To Go. 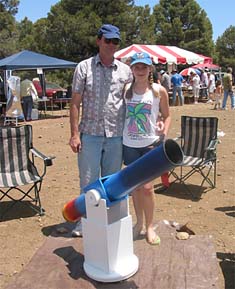 Gil McFarlane of Ventura, California, and his 13-year-old daughter, Gina, made this 4.5-inch f/10 Dobsonian with low maintenance in mind. A flat-glass window over the aperture holds the secondary mirror in place and keeps dust off the optics.

RTMC executive director Steve Edberg says that the event’s organizers are trying to make the Astronomy Expo more "family friendly" by adding features appealing to children, parents, and youth groups. He notes that more than 100 children under age 15 attended this year’s conference. "It’s important," he says, "to bring youth back into the hobby. The interest is there — we just have to make astronomy more accessible." In recognition of his tireless outreach efforts, Edberg received the 2003 Clifford Holmes award for promoting astronomy to the masses.

Ashley McDermott, RTMC’s director emeritus, was pleased with this year’s turnout, noting that high attendance over the last few years may be a promising sign for the hobby. "We’ve lived through a revolution in astronomy," McDermott said, referring, in part, to the introduction of affordable computerized telescopes. "We’ve seen RTMC grow and prosper over the years. Now it’s more than just ‘pushing glass.’ At the age of 72," he added, "I’m not able to lift a heavy scope anymore. And I don’t have the time or patience to hunt down faint objects. So I’m going to be one of those buying a computer-controlled telescope, to enjoy the sky while I still can."