Researchers suspect that tiny diamonds could pepper the lower cloud decks of Jupiter and Saturn.

Arthur C. Clarke could only be so right. In the sequels to his famous 2001: A Space Odyssey, the renowned sci-fi author described Jupiter’s core as a gigantic diamond — one that, if my childhood memory serves, is later used to build space elevators linking the surface with a giant space-station ring around Earth. 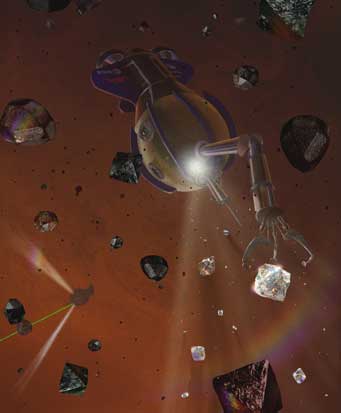 Deep inside Jupiter and Saturn, temperatures and pressures are high enough that carbon's most stable form is diamond. Of course, the carbon clumps would need polishing before they'd look anything like what you'd see in a jewelry store. This imaginative illustration shows a fictional robot collecting diamonds in Saturn's atmosphere.

In reality, Jupiter’s core is too hot for solid diamond to exist. But new work based on lab experiments and theoretical calculations suggests that both Jupiter and Saturn do have solid bits of diamond floating deep inside them.

Astronomers have suspected since 1981 that solid diamond exists inside Uranus and Neptune. Experiments published in Nature that year showed that shock waves could fracture methane (CH4) molecules, liberating the carbon atoms. These atoms would then clump together and, as they descended into the increasing temperatures and pressures inside the planets, be transformed into diamond.

But experiments couldn’t recreate the more extreme conditions inside Jupiter and Saturn until about a decade ago, leaving scientists in the dark about which forms carbon took there.

Building on their own observations with Cassini, as well as on investigations by Nadine Nettelmann (University of California, Santa Cruz) and others, Mona Delitsky (California Specialty Engineering) and Kevin Baines (University of Wisconsin–Madison) have determined that diamond should be the most stable form of carbon for a sizeable fraction of the gas giants’ interiors. On Saturn, the solid diamond should exist from about 6,000 to 36,000 kilometers (4,000 to 23,000 miles) below Saturn’s cloud tops, reaching about halfway down into the planet (Saturn’s radius is about 60,000 km). On Jupiter the conditions are slightly different, but there should be a thinner diamond layer in that planet, too.

In Delitsky and Baines’s scenario, carbon is yanked from methane by lightning. Their team’s Cassini observations of lightning on Saturn showed that a bolt’s shock wave and heat (we’re talking up to 30,000 kelvin, or 54,000° F) tears methane’s hydrogen and carbon atoms apart, and these carbon atoms clump together to form carbon soot — basically, the black fluffy stuff coming from a fireplace, Delitsky said in a press conference October 9th at the American Astronomical Society’s Division for Planetary Sciences meeting in Denver.

As these carbon particles fall deeper into the atmosphere, the temperature and pressure increase, affecting which form the carbon takes. In the top 12% of Saturn’s atmosphere, the most stable form of carbon is graphite, the stuff in pencils. Deeper down, these particles become diamond. The diamond layer extends from a temperature of 3,000 K and an atmospheric pressure 70,000 times that at Earth’s sea level to 8,200 K and 5 million times sea-level pressure.

This layer is actually pretty sparse. Lightning on Saturn should produce about 1,000 metric tons of carbon per year — which sounds like a lot, until you consider the gas giant’s total volume. The diamond layer takes up about 600 trillion cubic kilometers inside Saturn, and even assuming the diamond lasts there for 1,000 years, there should only be one millimeter-size diamond per cubic kilometer of atmosphere. Below the latitude bands where lightning regularly appears (around 35° N and S), that concentration could be ten times higher. But Baines stresses that these numbers are all rough estimates; the real values could easily be 10 times higher or lower.

Still, if we could pan the entire 600 trillion cubic kilometers of this layer in Saturn, we’d gather about 1 million tons of diamond. Due to the higher gravity and lower availability of methane on Jupiter, the king of the planets should have roughly a factor of 20 less diamond than Saturn, Baines says.

Deeper inside Jupiter and Saturn, the temperature and pressure are too high for solid diamond to survive: at about 8,000 K (for both planets), the diamond melts. Whether the resulting substance would actually be liquid diamond instead of liquid graphite is unclear: it depends on the atomic geometry.

In contrast, Uranus and Neptune never reach high enough core temperatures to melt their diamond. Pity that Neptune didn’t suit Clarke’s purposes: if he’d postulated a diamond-encrusted core for the blue ice giant, he might have come closer to the truth.

I remember reading that in Clarke's novel (2010?)
I always wondered if the science backed up his speculation.
Now, we know.

From the article: " one millimeter-size diamond per cubic kilometer of atmosphere". Well.... that is certainly an exceptionally LOW number! To put it in context using another precious substance, common seawater in the Earth's oceans contains about 20g of GOLD per cubic kilometer. That's a one centimeter-size nugget of gold per cubic kilometer, or by volume a thousand times more than the estimated quantity of diamond nuggets in the atmosphere of Saturn. Such a trivial quantity of diamond dust could never be mined in any economical sense (with apologies to Arthur C. Clarke). Though I suppose there might be a luxury market for a few "Saturnian diamond" engagement rings in a few hundred years. 🙂

I don't know my earth geology well enough to comment on diamond forming conditions on earth, but if 3,000K and 70,000 atmospheres pressure, did diamonds on earth originate in another planet?

No Bill, earthly diamond is an igneous mineral found in magmatic rock that has flowed up into the earth’s crust from much deeper down in the mantle. I doubt that the pressures and temps were as high as what you and the article mention, but given enough time crystals can grow in less extreme conditions. Our natural diamonds are thought to have taken from 1 to 3.3 billion years to have formed.

Re. Bruce's reply on 10/18/13: If diamonds formed slowly on Earth at less extreme conditions than Jupiter, but over a longer period of time (1 to 3.3 billion years), my grade school understanding of a carbon progression doesn't seem to follow. That is, first came biomass (the text book picture is always of land-based plants); then came oil; then came the soft and hard coals; and presumably, then came diamonds. Based on a bit of internet surfing, it appears that land based plants did not appear until 450 million years ago. Again based on the internet, in the requisite time period 1 to 3.3 billion years ago there appears that the biomass was made up of cyanobacteria perforiming photosynthesis (3.3 Ba) to multicellular sea-based life (1 Ba). With all respect, it is not clear that there was the requisite biomass available in the requisite time period. And in certainly doesn't support the plants/oil/coal/diamonds progression.

Interesting comment Bill. Let me explain why I doubt that any of the carbon atoms locked up in any natural diamonds on earth were ever part of any living organisms. Earth’s carbon originated in space (along with all other elements) and some of it would have been trapped deep beneath the earth’s crust inside the mantle. The hot mantle is plastic and flows over geologic time, driving plate tectonics in the crust. Diamond, being lighter than metallic minerals in the mantle would tend to rise toward the upper mantle. So diamond wouldn’t need to have come from any sedimentary coal formations. These are both too close to the surface (where pressures and temps are insufficient) and as Bill pointed out there hasn’t been enough time for coal to have been converted to diamond. Also the lower density of sedimentary rock insures that it will float or pile up (in mountain ranges) on top of the denser basaltic rock at the base of the crust, so coal can’t be subducted to a deep enough depth for diamond to have formed from coal. I’m not a geologist, so this may not be completely correct, but it is correct to the best of my knowledge.

I like your pair of comments Mortimer. Of course all would love to see the grand display that should happen if your prognosticating pans out, especially in light of ISON’s under-whelming show so far. But your not just making a wild, baseless prediction, for you were able to take the facts at hand and give what seem to be plausible reasons for your forecast. Your stock will rise greatly in this group if “ISON Explodes!” becomes a headline in about 40 days or so.

Oops! Meant to post the above to the Comet ISON blog.