Galaxy clusters exhibit some of the densest, most extreme environments in the universe. They can contain hundreds of gravitationally-bound galaxies, some of which pass through and collide with one another at average speeds of more than 2 million miles per hour (1,000 km per second ).

The seeds of most clusters are thought to have formed approximately 2 billion years after the Big Bang, and astronomers have seen “protoclusters” (clusters-in-the-making) that early. Pickings are still slim, though, when it comes to catching clusters at various stages of evolution, particularly at the point when their member galaxies transition from lively star formation to a more sedate existence. An international team of astronomers recently used a powerful infrared imaging camera, named FourStar, to help them discover the oldest cluster observed yet where this transition is happening. 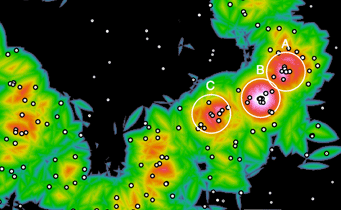 This near-infrared density map reveals concentrations of matter not visible in optical light. Individual dots are galaxies. Astronomers suspect the overdensities labeled A and B together mark a galaxy cluster. The overdensity marked C is less stark compared to its surroundings.

These results are the first from the FourStar Galaxy Evolution Survey, an effort using the 6.5-meter Magellan Baade Telescope in Chile to observe galaxies at redshifts greater than 1, or roughly the universe’s first 6 billion years. The potential cluster is a set of 29 galaxies condensed into a region of sky approximately 800,000 light-years across. Although this might seem like a large area, for galaxies that’s pretty dense: to compare, the closest big spiral galaxy to the Milky Way, Andromeda (M31), lies roughly 2.5 million light years away, a distance three times larger.

Unlike its older, more populated cousins that exist in the local universe, the new cluster is still young, shining from just over 3 billion years after the Big Bang, the team reported in the April 1st issue of Astrophysical Journal Letters. Researchers think that between then and now the cluster would have evolved into a cluster like the rich Coma Cluster in Coma Berenices, which contains thousands of galaxies.

“It’s like we’re looking at toddler pictures of a really old person,” says Kim-Vy Tran (Texas A&M University), a coauthor of the paper. At early stages, she explains, a galaxy is basically a star factory, producing tens to sometimes hundreds of new stars each year. These galaxies look “blue” because they have a large number of live-fast-die-young massive stars shining from regions of active star formation. As the galaxy ages, though, production slows, eventually stopping altogether. Since the blue stars don’t live long, such galaxies look red because they glow with older, redder stars.

“In the local universe all galaxies in clusters are red,” Tran says. “So, we try to increase the timeline as much as possible to fill in those baby pictures, all the way to retirement. We’ve got a lot of pictures around retirement and middle age, but what we want to do is look at those formative years.” 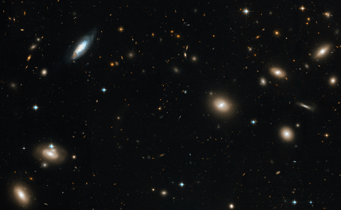 This Hubble Space Telescope image captures part of the Coma Cluster, one of the densest known galaxy collections. Astronomers have now detected another cluster about halfway back in the universe's history that is the oldest found in the middle of its transition from active star formation to a quiet life.

Interestingly, this small cluster not only includes red galaxies but it also has a dash of blue galaxies still churning out stars, which suggests that the cluster is undergoing an important transformation in star formation rate.

“The fact that we see some blue galaxies and some red [at this distance] indicates that we’ve really hit this transition and can now probe on either side,” Tran says.

Different clusters will transition from active, star-forming blue galaxies to passive red galaxies at different times. While the loss of cool gas over time probably determines when galaxies stop forming stars, astronomers don’t really understand when and why cluster galaxies run out of gas, especially compared to their counterparts in less dense environments. Finding a cluster that is undergoing such a transition could help detect what triggers this transition.

“Clusters are the places with the most dark matter in the universe,” Brodwin says. Cosmic structures such as galaxies and galaxy clusters form where dark matter has pooled, and larger dark matter concentrations collect regular matter better. “In a very real sense knowing when the first clusters formed, how big they are, and how they grow over time tells us a lot about dark matter. Indeed, if our theory of dark matter is wrong, it would not match what we see in terms of cluster evolution.”

Tran says this cluster is just the first of many observations yet to come from the FourStar survey. “We’re still actually taking observations for this survey, and already we have this great result. There’s still a lot more to discover.”

Another galaxy cluster hunt, based at the South Pole Telescope, recently finished its five-year sky survey. That survey is using clusters to track the influence of another cosmic mystery — dark energy — over the universe's history.