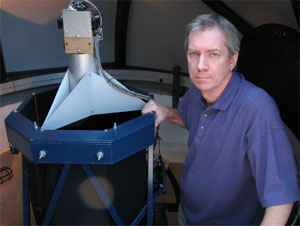 John Broughton stands next to the computer-controlled 0.5-meter (20-inch) reflector that he used to discover comet P/2005 T5.

An American, a Brazilian, and an Australian will share the eighth annual Edgar Wilson Award for amateur comet discovery. According to IAU Circular 8730 issued by the Central Bureau for Astronomical Telegrams last July 17th, the winners are Charles Juels (Fountain Hills, Arizona) and Paulo Holvorcem (Campiñas, Brazil) for discovering C/2005 N1, and John Broughton (Reedy Creek, Queensland, Australia) for P/2005 T5. In addition to the fame and prestige associated with the award, each winner receives a plaque and a cash prize typically worth several thousand dollars.

This is the second time that Juels and Holvorcem have won the award. In 2003 the pair was recognized for discovering C/2002 Y1. That same year Broughton was chosen as one of the recipients of the Planetary Society's Eugene Shoemaker Near-Earth Object (NEO) Grants. He used to the grant money to purchase a CCD camera for NEO hunting and tracking from the Southern Hemisphere.

Established in 1998 in memory of American businessman Edgar Wilson, the award is given to amateur astronomers (or professional astronomers acting in an amateur capacity) who, during the 12 months preceding June 10th each year, find one or more new comets using privately owned equipment. For more information, go to http://cfa-www.harvard.edu/iau/special/EdgarWilson.html.