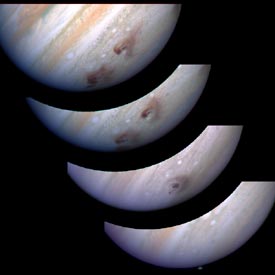 This mosaic shows the G impact site of Comet Shoemaker-Levy 9. From lower right to upper left it shows a view 5 minutes after impact, the same location 1.5 hours later, 3 days later (the L impact site is to G's right) and 5 days later.

This week marks the 10th anniversary of Comet Shoemaker-Levy 9 impacting the clouds of Jupiter. Here Sky & Telescope contributing editor and SL9 codiscoverer David Levy reflects on some of the events surrounding the Great Comet Crash.