Comet Water for a Parched Earth

Without water, Earth would be a dry, lifeless, desert. Yet studies show that Earth formed with little or no water. This means the oceans that now cover more than two-thirds of our planet’s face were probably gleaned from celestial bodies that crossed paths with Earth in the first 800 million years of its lifetime. 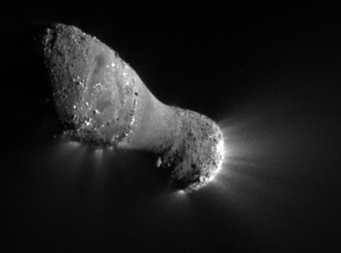 The water of comet 103P/Hartley 2 is characterized by a similar deuterium-to-hydrogen ratio as the water on Earth. This image of the comet was taken on November 4th, 2010, by NASA's EPOXI spacecraft.

It’s logical to think that our planet’s water came from collisions with comets, whose icy reservoirs would have been ample to supply Earth. Scientists have probed comets by measuring the ratio of hydrogen to its heavier atomic variant, deuterium, in the water from these bodies, and then comparing it to D/H ratio in seawater on Earth.

The conundrum is that our water’s D/H ratio is1.6 × 10–4 (0.016%), whereas comets studied so far contain twice as much deuterium(0.03%). It just wasn’t a good match. Instead, primitive meteorites (carbonaceous chondrites), likely derived from asteroids, are almost identical to the ratio in Earth’s water. Asteroids could have delivered at least 90% of water on Earth. (For details, read “The Cosmic Origin of Our Water” in the January 2011 issue of Sky and Telescope.)

But a more recent observation shows that at least one comet — and presumably others — contain a D/H ratio identical to seawater. Last November when periodic comet 103P/Hartley 2 passed very close to Earth, an international team led by Paul Hartogh studied it using the Heterodyne Instrument for the Far-Infrared (HIFI) on the Herschel Space Observatory. They analyzed the deuterium content in the vaporized coma that surrounds the comet’s mile-wide nucleus and found that the D/H ratio of Hartley 2 is 0.016% — a match! In a paper published in this week’s issue of Nature , Hartogh and his team reopen the case for comets as a significant source of Earth’s water. 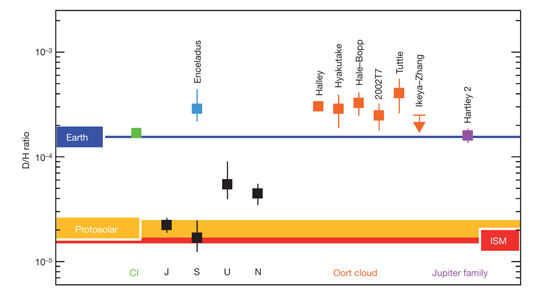 A graph showing the D/H ratios of the different bodies in the solar system. In the illustration, the outer planets are represented by the first letter of their names - Jupiter (J), Saturn (S), Uranus (U), Neptune (N), and the interstellar medium and carbonaceous chondrites are abbreviated to ISM and CI respectively. Click for a larger image.

Hartley 2 is classified a Jupiter-family comet because it orbits the Sun orbits every 6.46 years. If it had originated from the cloud of comets called Oort Cloud, which today lie at the very edge of our solar system, roughly one light-year away, its D/H ratio should have matched those of comets such as Hale-Bopp or the Halley family of comets.

But the significantly lower level of deuterium suggests an origin closer in. This conclusion is based on models of the solar system that suggest that the celestial bodies in closer orbit around the Sun have lower deuterium than those farther away. The team thinks that Hartley 2 might have originated instead in the frigid Kuiper Belt, a cometary reservoir beyond Neptune, and was then pulled close to the Sun by the gravitational perturbation of the outer planets. But this hypothesis has to be verified with further observations.

“Our study indicates that our understanding of the distribution of the lightest elements and their isotopes, as well as the dynamics of the early solar system, is incomplete,” says coauthor Geoffrey Blake (Caltech) in a press release.

More observations of Hartley 2 and such comets will help scientists expand their understanding of the early solar system, and explore the possibility of comets being a source of Earth’s water.

For more illustrations read the stories on the websites of The European Space Agency, the University of Michigan and the Max-Planck Institute.