The process of star formation, with planet formation as its byproduct, looks more tangled and quirky the more astronomers study it. The old picture of a dark cloud simply shrinking down to star size and lighting up is being replaced by complex models involving turbulence, infalling streams, magnetically driven jets, and other spectacular nonlinear phenomena.

The molecular cloud CB 244 in Cepheus is 650 light-years away. The false-color image shows mid-infrared light being scattered by relatively large dust grains in the cloud's interior — the newly discovered â€œcoreshineâ€. Larger view.

But a key to understanding star formation is simply being able to see it! The whole process is usually buried out of sight in dense, opaque interstellar clouds. Penetrating these clouds is one reason why astronomers have been so keen on building infrared telescopes.

Now, using the infrared Spitzer Space Telescope, astronomers have identified a new aspect of these hidden scenes, which they've named "coreshine." A team led by Laurent Pagani (Paris Observatory) has found copious infrared starlight being reflected and scattered from large dust grains inside many of the dark cocoons that surround the infant stars.

The sizes of the grains seems to make all the difference. Pagani explains that grains are larger near a cloud's dense core. Some there have grown to be about 1 micron in diameter, large enough to scatter infrared light with a wavelength of 3 to 5 microns. 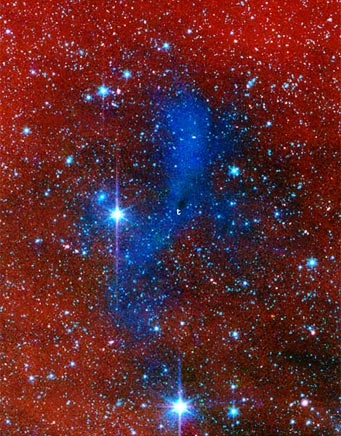 The first cloud where Pagani noticed coreshine is Lynds 183, located about 360 light-years away in Serpens Cauda. The cloud (seen in the mid-infrared at right) was first cataloged by Beverly Lynds in 1962 as part of her survey of dark nebulae on the photographic plates of the Palomar Sky Survey.

In 2005 the Spitzer telescope recorded relatively short-wavelength infrared light from the dark spot (here shown blue). “My first reaction was that this light was a painful problem,” says Pagani, “I asked dust specialists, who had no idea.” Astronomers at the time thought that dust grains in a dark core would still be as small as 0.1 micron, the same as in interstellar space generally. Grains this small would be transparent to infrared light with wavelengths 30 to 50 times larger. So Pagani put the data aside.

“One day, I discussed [the problem] with a colleague,” he continues, “who told me that I could solve my problem with bigger grains than usual” — 1 micron instead of 0.1. Pagani contacted Jurgen Steinacker of the Max Planck Institute for Astronomy, who had developed 3D models for studying dark clouds. Steinacker’s models demonstrated the coreshine effect well.

“After that,” says Pagani, “I started collecting images of as many clouds as I can to check for the presence of the effect elsewhere.” The team has observed 110 clouds and found coreshine in about half.

“The core structure seems very smooth,” says Pagani. “The coreshine reveals this very clearly, as it is the first time we have a sensitive tracer going deep into the cloud.” The group's paper appears in the September 24th Science.

More information and pictures are in press releases from Paris Observatory, the

Spitzer Space Telescope, NASA, the Max Planck Institutes, and at Astronomy Picture of the Day. Here's the abstract of the Science paper.

Julie Freydlin is a freelance science writer based in New Jersey. 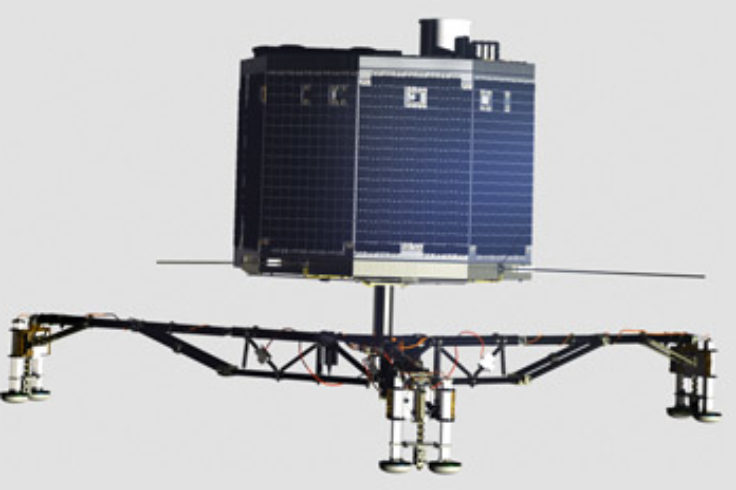 60-Second Astro News: A Carnivorous Quasar and a Galaxy Ghost