Last night I gazed up at the winter sky, toward the smallest and fastest extrasolar planet ever found. It’s left of Orion in dim Monoceros, the Unicorn. I didn’t see it, of course. The planet, known as COROT-7b (sometimes listed as COROT-Exo-7b), is no more than twice the diameter of our own Earth, and it’s 390 light-years away. Even its sun is only magnitude 11.7, a faint speck in an amateur telescope. Still, it was an exciting experience: to know that I was looking toward the closest thing to a "sister Earth" to have its diameter measured — but one simmering in the heat of its sun in an incredibly small, unEarthly orbit. And to realize that discoveries of even more Earth-like exoplanets are coming.

Transiting planets compared. Left: The starspotted orange dwarf CoRoT-7 with its low-mass planet in transit (artist's concept). Right: A photo of Venus transiting our slightly larger Sun on June 8, 2004 (though a blue solar filter). Venus is slightly smaller than Earth, but because it's only about a quarter as far from us as the Sun is, it appears as big to us in transit as a 3.4-Earth-diameter planet would if seen from a very great distance. Click image for an animation (1/3 MB).

The French satellite COROT (short for Convection, Rotation and planetary Transits) first caught the planet transiting its star last spring, but confirming its nature took months with large ground-based telescopes. “It was a long and painful process,” says team member Artie Hatzes at Tautenburg Observatory in Germany. Today, at the First COROT International Symposium in Paris, the discovery was officially announced.

COROT keeps watch on 12,000 stars at a time to detect possible planetary transits. A faint star known as TYC 4799-1733-1 showed minute brightness dips — less than a tenth of a percent — every 20.4 hours. Last summer, spectra showed the star to be a main-sequence star of type K0, somewhat cooler and smaller than the Sun. For such a star the observed brightness dips correspond to a planet silhouette only about 1.7 times as wide as Earth. Never before have astronomers found such a small exoplanet.

But figuring out the mass turned out to be more complicated. Because the planet is a relative lightweight, it induces only a slight gravitational wobble in its star. And radial-velocity measurements were difficult to interpret because the star has spots. These complicate the average apparent radial velocity of the star as its surface rotates and carries the spots around. “It’s a tricky one,” Hatzes told me. Moreover, the team strongly suspects the presence of additional planets in the system pulling on the star. 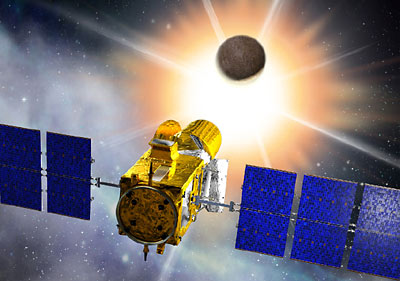 For now, it seems that COROT-7b weighs in at between 5 and 11 Earth masses. But data analysis is still going on right up through today. Says Hatzes, “It makes for a lot of excitement. I have not had this much fun doing science in a while!”

If that value holds up, this probably isn't the lowest-mass "super-Earth" found to date. A few others have have come in as low as about 5 Earth masses by the radial-velocity method. But the apparent record-holder was announced last year by David Bennett of Notre Dame University; he and his colleagues discovered a low-mass body (MOA-2007-BLG-192Lb) by watching for microlensing of star images. The team’s best estimate for that planet’s mass is 3.3 Earths, though Bennett admits that there are large uncertainties because of poor coverage of the microlensing event.

According to Malcolm Fridlund, the European Space Agency project scientist for the COROT mission, MOA-2007-BLG-192Lb “is of course not a clear case. Microlensing is a great technique, but it has many free parameters,” meaning that data are hard to pin down in any one case. But Bennett counters that, in general, microlensing is no less reliable than other planet-detection techniques. “Few people really understand microlensing,” he says.

There’s no doubt, however, that COROT-7b is the smallest exoplanet ever to have its diameter measured.

And it’s the fastest, too. It races around its orbit at over 200 km per second, at a mere 2.5 million km from its parent star. That’s only about four stellar radii from the star’s surface. Being so close, its temperature should be between 1,000° and 1,500° Celsius (1,800° and 2,700°F), red-hot. Incidentally, astronomers have no clue as to the physical nature of the object. It could be either a liquid lava world under a very thick atmosphere or perhaps a “sauna planet” of half water (superheated) and half rock.

NASA’s Kepler satellite, due to be launched on March 5th, will probably discover many more Earth-like exoplanets, also using the transit method. Says Borucki (who is lead scientist for the Kepler mission): “The COROT discovery is a relief to everyone who was worried that the inner migration of giant planets might have destroyed all or most small planets. We will benefit from their pioneering work.”

Kepler will be a bigger and more powerful mission, but don't count out COROT from making future headlines. Fridlund says there are "hundreds" of other possible planet candidates in the COROT data awaiting radial-velocity followups.

A few years from now, I may not be able to remember the sky positions of the many stars that harbor known Earth-like planets. By then, they may be all over the place.

A planet about 1.7 times the diameter of Earth is cool. But it going around the star in 20 hours... THATS AMAZING!!!!

This is an intriguing find. Consider this smallest exoplanet claimed so far, orbits about 0.0167 AU from its host star, compared to Mercury which is about 0.387 AU from the Sun. COROT-Exo-7b orbits about 23 xs closer to its host star than Mercury does to our Sun. How did it get that close to the host star? Did it form farther out and migrate inwards, only to stop so we can see it today vs. continue and plunge into the host star? Did it form in situ? That would seriously challenge stellar evolution models and slow growth thinking that starts with dust grains using random collisions to build planets over immense time spans.

While Kepler and COROT will likely find many more Earth-size planets, any discovery will be restricted to the (handfull?) mission target fields, i.e. very specific positions in the sky. Photometrically discovered planets will also not be Earth-like in orbital characteristics (just as Coroto-exo-7b isn't). Those planets will not be "Earth-twins".

To discover Earth-like planets, we need a space mission like TPF or Darwin, both currently postponed "indefinitely" by NASA and ESA.