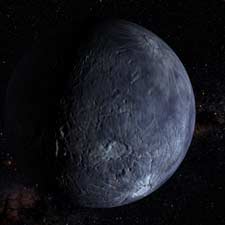 An artist's impression of a large Kuiper Belt object. When small meteoroids hit these primitive, icy bodies, sprays of dust get ejected. Such dust, spread thinly throughout the Kuiper Belt, provides certain atoms that reach us as cosmic rays.

Scientists have finally identified a missing source of so-called anomalous cosmic rays — charged particles striking the Earth (and spacecraft). Their work accounts for certain particles that for a long time had no plausible origin.

The particles in question are ionized (electrically charged) atoms of elements such as carbon, iron, and silicon. Their energies range from about 10 million to 100 million electron volts, which means they're moving very fast but still far below the speed of light. From their energy distribution, scientists can tell that they must be accelerated to their high speeds fairly nearby, not far off among the stars like other cosmic rays — but that they can't originate in the inner solar system either.

Moreover, there's the question of where the atoms came from before they got accelerated. They cannot have entered the solar system from beyond, because atoms of this class would be ionized in interstellar space and thus unable to enter the region dominated by the Sun's magnetic field.

Michael Combi (University of Michigan), Nathan Schwadron (Southwest Research Institute), and two colleagues say they have got it all figured out. "The energy distribution tells us the particles were produced in the outer solar system and then speeded up," says Combi. The evidence all points to the Kuiper Belt, the ring of dust, rubble, and larger objects beyond the orbit of Neptune.

In this scenario, hydrogen atoms in the solar wind strike Kuiper Belt dust bits and sputter off some of their carbon, silicon, and other atoms. These become charged and swept away by the solar wind. When they reach the heliopause — the place where the solar wind and its magnetic field strike the interstellar medium — the magnetic turbulence there thrashes the charged atoms around and accelerates them to their high energies. "At that point they're fast enough to go anywhere," says Combi, even back toward the Sun and Earth.

"This gives us an explanation for that whole population of particles," he says. "We can actually use analyses of these particles to tell us the global composition of the Kuiper Belt."