Astronomers have discovered an unexpected explanation for why they can only find a small fraction of the satellite galaxies the Milky Way is supposed to have.

You would think a galaxy would be a hard thing to lose. I mean, the Small Magellanic Cloud is one billion trillion times the size of your keys. But in their newly found ability to understand the universe by creating virtual cosmoses with supercomputers, astronomers have hit a problem: simulations predict thousands of dwarf galaxies (such as the SMC) roam around the Milky Way and other large galaxies, but observations suggest there are only tens to hundreds. 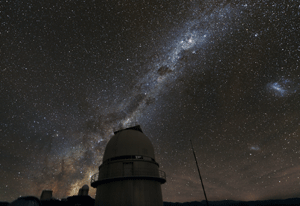 The Large and Small Magellanic Clouds appear as afterthoughts next to the Milky Way's cosmic rainbow, shown here above the European Southern Observatory's La Silla Observatory in Chile.

The “missing satellites problem” has a lot of people scratching their heads. Scientists have proposed various solutions, which usually assume that the galaxies are there but have few or no stars and are therefore invisible to us. (The so-called dark galaxies, such as Segue 1.)

A new theory posted recently to the arXiv adds an unexpected twist to the investigation. Using simulations that zoomed in on a virtual version of the developing Milky Way’s neighborhood, an international team of astronomers has discovered a surprising star-preventing culprit: friction.

On large scales, the universe has a spiderweb-like structure. Dark matter forms gigantic filaments, and these filaments act like riverbeds that siphon streams of dark matter and gas into the forming galaxies nestled along them.

These webby structures don’t just sit there in space. They move through the universe, sweeping through each other, growing and changing over time. The new simulation looks at the filamentary "pancakes" that created the Local Group, the family of galaxies that includes the Milky Way and the Andromeda Galaxy. The team found that, as the forming dwarf galaxies swept through a thick concentration of material (the pancake) in their simulation, the web structure removed most of the gas from the smallest dwarfs. Without gas, the dwarfs stopped forming stars.

“This is completely new,” says study coauthor Julio Navarro (University of Victoria, Canada). He says no one — including himself — expected the cosmic web was able to remove gas from dwarf galaxies. “I told my students, ‘It must be wrong. Go and do it again.’ So I sent them back to do it, and I eventually got convinced that it was right.” 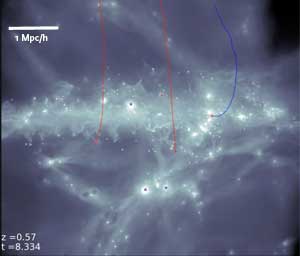 This shot from the researchers' simulation shows a gigantic pancake of intergalactic material, through which forming galaxies (small dots) are passing. As they pass through, some dwarf galaxies (paths traced with red lines) can't withstand the pancake's ram pressure, and they're stripped of their star-forming gas. Scroll down to watch the movie.

Although filaments and pancakes look obvious in cosmological simulations, they’re much less dense than galaxy halos. Intuition suggested that such a diffuse structure could not do anything to a galaxy, even a tiny one, Navarro says.

But what astronomers didn’t anticipate was how speed would factor in. These sheets move at speeds typical of the Local Group system — in other words, hundreds of kilometers per second. And a sheet moving at 300 km/s could ram gas out of dwarfs even if they were 50 times denser than the ones simulated.

This ram pressure is not gravitational but frictional, says Puragra GuhaThakurta (University of California, Santa Cruz), who was not involved with the study but finds its results intriguing. We’re used to thinking of friction between two solid surfaces rubbing against each other. But friction also happens when a solid moves through a fluid (like your hand moving through water in a swimming pool) and when one fluid moves through another — like water shot out of a squirt gun in the swimming pool, he says. Both your hand and the squirted water will move less easily than they would through air, because water is more viscous (it resists flow more and drags more on what passes through it).

The same thing happens when the gas in a cosmic pancake sweeps through that in a dwarf galaxy. As the small galaxy rushes through the filaments in the cosmic web, the web drags on the galaxy’s gas and strips it from the dwarf.

Such simulations are in their infancy, which is another reason no one realized this cosmic stripping could happen, GuhaThakurta says. Theorists have simulated the cosmic web for years, but they usually only follow dark matter, because dark matter responds solely to gravity and is therefore easier to model. The new simulation added gas particles to the dark matter but also looked at the viscous interaction between the gas particles. That allowed Navarro’s team to discover the web’s effect.

But the cosmic web cannot be the only culprit. “The cosmic web exists today, but it certainly didn’t form instantly,” GuhaThakurta explains. Instead, it developed over billions of years as gravity pulled structures together, and it continues to evolve with the universe. “The universe started out as very smooth. It’s gone from that to a highly structure state, and that just takes time to happen.”

For that reason, the web wouldn’t really have an effect until 3 billion years after the Big Bang. Astronomers have spotted galaxies much earlier, within the universe’s first 500 million years. Other processes — such as the ionizing radiation of the first stars, which could have blown gas from small galaxies and thereby prevented them from forming more stars — also played a part in making dwarf galaxies invisible to us, the authors suggest.