February is eagerly awaited by British and western European astronomers, since it brings the AstroFest convention to London's social calendar. For many years the capital's borough of Kensington has hosted AstroFest at the well-equipped and spacious Town Hall venue. This year's event followed the familiar two-day theme — Friday and Saturday, February 8-9 — bringing a broad mix of telescope manufacturers and suppliers, lecturers, and exhibitors to an eager public. 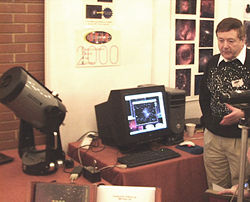 Astrophotographer Terry Platt of Starlight Xpress Ltd., British manufacturer of CCD cameras for astronomical and industrial use, explains the virtues of one of his new imaging systems at AstroFest 2002.

Keen to emphasize astronomy and space science as a fun hobby for all, major groups like the British Astronomical Association and the Society for Popular Astronomy had a prominent show presence, while other astronomical organizations and 27 exhibitors ensured that the three display floors were continually packed with attendees.

Unlike some other popular conventions worldwide, the European AstroFest doesn't shy away from presenting astronomy as an academic discipline. So it's also become something of a showcase for astronomy education in the United Kingdom. University College London and the University of Central Lancashire were keen to recruit would-be professional astronomers into higher education, while the Particle Physics & Astronomy Research Council and astronomy.ac.uk catered to those with a broader interest in the physical sciences or those wishing to take courses over the Internet. 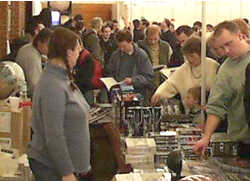 Crowds descend on the numerous telescope and book exhibitors, keen to take advantage of AstroFest 2002 special offers and promotions.

When not browsing for bargain eyepieces and accessories, posters and books, many attendees took advantage of the 16 lectures organized in four sessions. An eclectic range of subjects provided something for everyone — from historical profiles of eminent astronomers to cutting-edge science conducted at the world's largest observatories.

One notable attendee was Dr. Paul Roche, currently the Faulkes Telescopes Project Scientist. Former head of education at the National Space Centre in Leicester, England, Roche is a familiar face on UK television thanks to the BBC2 series "Final Frontier." He is now the National Schools Astronomer, charged with preparing astronomers and pupils for the imminent availability of dedicated robotic research-grade instruments via the Internet.

AstroFest 2002 succeeded very well in evangelizing astronomy and space science to a wide audience, from children to seniors. Evidently the already healthy interest in these subjects among Britons and western Europeans looks set to grow further.