Four years of gamma-ray observations might finally shut the case on the mystery of cosmic rays' source. 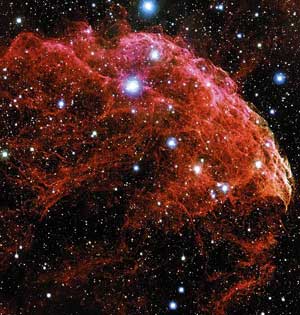 The shell of supernova remnant IC 443 (known as the Jellyfish Nebula) reveals its complex filaments in this image of emission from shock-excited hydrogen. Observations by the Fermi Gamma-ray Space Telescope suggest that IC 443 is producing cosmic rays.

Astronomers working with the Fermi Gamma-ray Space Telescope say they might finally have the “smoking gun” they’ve needed to convict supernova remnants as the origin of energetic particles called cosmic rays.

Cosmic rays have perplexed scientists since their discovery in 1912. They’re charged particles — mostly protons — that whiz through the galaxy and bombard our atmosphere in an unending monsoon. Those created inside the Milky Way have energies up to 1015 electron volts, 100 times more energetic than protons crashed together by the Large Hadron Collider at full power (and those are the less energetic cosmic rays).

Because they’re charged, cosmic rays interact with whatever magnetic fields they come across, erasing their origin and making them appear to come from everywhere. Instead, researchers track the particles with gamma rays, which cosmic rays produce when they run into stuff.

Astronomers have long favored supernova remnants as the primary instigator. But even in 2011, after the Italian AGILE team announced gamma-ray observations that fingered the supernova remnant W44 as a cosmic-ray source, the data still weren’t good enough to close the case. Complicating matters was a study that suggested forming clusters of hot, massive stars called OB associations could also accelerate cosmic rays.

But supernova remnants might have finally tipped their hand. Four years of observations by the Fermi satellite reveal a characteristic bump in the gamma-ray spectra of two remnants, W44 and IC 443 — a.k.a. the Jellyfish Nebula, which hides in a rich region in Gemini about 10° from the Crab Nebula. This bump is best explained by gamma rays produced by cosmic rays, says Yasunobu Uchiyama (SLAC / KIPAC at Stanford University), who coauthored the team’s paper in the February 15th Science. 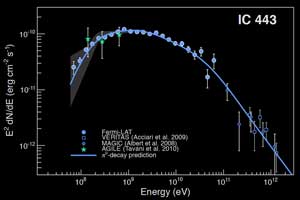 Gamma rays from the supernova remnant IC 443 fall off sharply at energies below what would be produced by the decay of neutral subatomic particles called pions. Click for a larger view.

Cosmic-ray protons gain their energy by surfing in and out of a supernova’s magnetized shock wave as it slams into the surrounding interstellar medium. This surfing accelerates the particles to relativistic energies (10% or more of the speed of light). When the relativistic protons collide with other protons sitting in surrounding molecular clouds, they produce subatomic particles called pions. These pions in turn decay to two gamma rays of 67.5 MeV each.

But the picture is more complicated than just looking for gamma rays with this energy. The pions (and therefore the gamma rays they produce) preserve a fraction of the original cosmic rays’ relativistic energy, which means that the gamma rays experience what’s called a relativistic Doppler shift and appear more energetic as they approach us than they would if we were traveling along with them. That creates a range of apparent energies above the predicted 67.5 MeV — a range Uchiyama and his colleagues observed in Fermi’s data.

Analyzing the observations, Uchiyama and his colleagues say the best explanation is that the gamma rays come from pion decay.

Other astronomers agree. “At this point I think the evidence is excellent that we are observing pion-decay emission from relativistic protons,” says Roger Chevalier (University of Virginia), who studies supernovae and their interaction with their surroundings. “Of course, it is hard to be 100% certain, but I would bet on it being pion decay.” 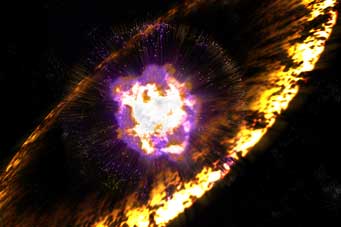 Shock waves from a supernova are thought to accelerate ambient protons to cosmic-ray energies through a process known as Fermi acceleration. In this mechanism, the protons gain energy from collisions with turbulent magnetic fields on either side of the shock wave.

Uchiyama explains that the case might still be shaky because the energy distributions they infer from Fermi’s observations are different from what’s expected. He suggests that the difference arises because the shock waves are pushing through dense molecular clouds instead of the regular, more diffuse interstellar medium. “Our new paper is a big step, but not yet final.”

Richard Mewaldt (Caltech) notes that the supernova remnant and OB association theories are not mutually exclusive. The massive stars in such associations die young as supernovae, and the shock waves from these explosive deaths could pump up low-energy cosmic rays produced by the stars’ winds. Energy-budget-wise, supernovae are the best bet to produce the galaxy’s cosmic rays: the power of a stellar wind is perhaps 0.1% of that in a supernova shock, he says.

The cosmic-ray case will hopefully close with observations of other remnants. Uchiyama says that pushing data below 60 MeV — the lowest energy Fermi managed to observe — won’t help matters, because other types of emission will overwhelm the pion-decay signal at those energies.