NASA’s Mars Science Laboratory — Curiosity — has successfully crossed a sand dune standing between the rover and its final science destination. 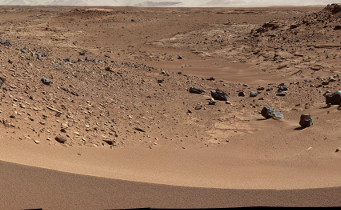 This image combines several frames taken by the Mast Camera on Curiosity. In the foreground is the sand dune known as Dingo Gap. Beyond the dune lies the relatively smooth terrain leading to Curiosity's final science destination, Mount Sharp.

It’s been 18 months since Curiosity stylishly landed in the vast Gale crater on Mars. But the “7 minutes of terror,” during which the spacecraft slowed from 13,200 miles per hour to a dead stop, wasn’t its last challenging feat.

Just last week Curiosity’s handlers agonized over whether or not to send the rover across a 3-foot-tall sand dune — an obstacle along an otherwise relatively smooth route to the foothills of “Mount Sharp,” the rover’s final science destination.

For the past several months, scientists have been seeking a more forgiving terrain, since rough rocks have been ripping holes into the rover’s six aluminum wheels. The smoother terrain beyond the sand dune — the so called “Dingo Gap” — provides such a pathway.

But first Curiosity had to overcome a potentially deep sand trap, an obstacle that couldn’t be taken lightly as it was the cause of the rover Spirit's demise in 2010. That rover never did escape and eventually froze to death while mired in a deep sand dune.

Curiosity’s flight controllers spent days carefully assessing the dune’s physical characteristics. They studied the above panorama and even commanded Curiosity to carry out a “toe dip” by gently rolling the large wheels back and forth over the crest in order to ensure it was safe to mount.

Once the dune was deemed safe, the team commanded the 1-ton rover to start the ascent. On February 6th, Curiosity successfully crossed the dune.

The rover can now safely continue along a southwestward route to the lower slopes of the crater’s towering central mound. Mount Sharp is a stack of layered sediments that rises 3 miles (5 km) above the crater’s broad floor. It’s likely that the lowest layers were laid down more than 3 billion years ago.

As Curiosity climbs up the slopes, it will read a history of the Red Planet’s changing geologic conditions and help researchers understand when and how it transitioned from a wet habitable world to the dry inhospitable planet it is today. Ultimately the rover could answer the main science goal of its mission: was Mars ever suitable for life?

The rover has already seen huge success since its arrival in August 2012. After its initial descent, Curiosity spent a few months exploring a nearby expanse of exposed rock known as Yellowknife Bay. This proved to be the bottom of an ancient lake covered in mudstone.

The 5-mile trek to Mount Sharp will likely take many more months, bringing Curiosity there in the middle of this year. The rover will continue to work along the way, checking out rocks and other geologic features that look particularly interesting.

According to the International Astronomical Union, the large martian mountain informally known as "Mount Sharp" is officially named "Aeolis Mons." Prior to the Mars Science Laboratory Curiosity mission, the mountain was unnamed. The NASA Jet Propulsion Laboratory team planning the Curiosity mission decided to honor the late Cal Tech geologist Bob Sharp by naming the mountain after him. But the IAU has clear rules about nomenclature, including, "commemoration of persons on planetary bodies should not normally be a goal in itself, but may be employed in special circumstances and is reserved for persons of high and enduring international standing. Persons being so honored must have been deceased for at least three years." On Mars, mountains are considered "other features" and are named, "from a nearby named albedo feature on Schiaparelli or Antoniadi maps." In 2012 the IAU named Aeolis Mons after the surrounding area of Aeolis. I think that Sky and Telescope should have an editorial policy of using official IAU terminology, and if informal names like "Mount Sharp" are used, the official descriptor should also be used.

I have been eagerly following Curiosity's journey via the raw images JPL posts on its MSL site. I am astonished and baffled that a most remarkable,large rectilinear feature has not been remarked upon in any PR news or articles such as this. It appears to be located at least 100 yards west of Dingo pass, on the north side of the path the rover is taking. Two of the best images of it are a Sol 529 Mastcam, 6 rows down and farthest to the right on that row, listed as taken at 17:04:02 UTC Jan. 31. Two other images on that row also show it, all from the side. Then,on sol 538 right navcam, second row down, first two from the left seems to show it both closer and from a different angle, although much more in shadow. Times listed as 00:40:07 UTC and 00:39:36 UTC Feb. 10. The same feature can be seen on quite a few other mastcam and navcam images between these two dates but these are about the best. This feature can also be (barely) seen in the very small scale image that appears with this article, about 1/4 in. from the top and 1/2 in. from the left edge. The raw images I refer to above are much better, showing considerable detail. Has anyone else noticed this feature and care to comment?

Ultimately the rover could answer the main science goal of its mission: was Mars ever suitable for life?

That was answered a year ago!

Ultimately the rover could answer the main science goal of its mission: was Mars ever suitable for life?

That was answered a year ago!

Considering what Spirit had troubled into (which was rather peculiarly fluffy) this move took some fair amount of guts. However, as again confirmed from this passage and aftermath imagery and other images returned from the MER rovers, it seems that dunes generally - at least by and large - are fairly firm and don't pose much of a hazard - at least of the sort of nasty quagmire Spirit lumbered into. Continued caution en route is well justified.

In any case, it would have been quite a sight to see the rover climbing that slope and move over the crest of that substantial dune: it is an event that vividly energizes the imagination!

@Robert: ultimately Curiosity could find a great deal more than whatever you seem to assert was established a year ago. Patience is a virtue.

"Has anyone else noticed this feature and care to comment?"

Yes, I will give it a whirl: rocks very often fracture along surprisingly straight lines.

Anthony, you wrote: "According to the International Astronomical Union, the large martian mountain informally known as 'Mount Sharp' is officially named 'Aeolis Mons.'" Yes, but honestly, so what? S&T's editors have already opened this issue for discussion (months ago). IAU naming conventions are useful on an intermediate time scale but irrelevant both on short time scales and long time scales. On the short end, the folks at JPL (or indeed at any space exploration authority elsewhere on Earth) can give whatever convenient or commemorative names they choose. Let's call it 'Mount Sharp' while it's ous to explore and add a small footnote about IAU names. There's nothing wrong with that. On a longer time scale, the IAU's naming conventions apply to astronomical objects --those that are viewed from the Earth and agreed upon by various other national astronomical groups which have signed on to abide by IAU decisions. They have no other status. If, in twenty years or two hundred years, some group of people move to this spot on Mars that Curiosity is exploring and decide to call the current 'Mount Sharp' instead 'Mount Dull', then, that's that, their name will be the only name that matters. The local martian post office will deliver to addresses at Mount Dull, not Mount Sharp and surely not the IAU's "Aeolis Mons". The transition from "astronomical object" to "inhabited place" throws all the IAU rules out the window. Places are named by residents, or to put it in more familiar terms, possession is nine tenths of the (naming) law. And back to the original, current naming issue, for the time being at least, the scientists on the NASA/JPL Curiosity team are in possession of this site. Mount Sharp it is!

Frank, if and when human settlers arrive on Mars and establish a government, they can revisit the nomenclature rules. I doubt that will ever happen, and I am certain that if it does neither you nor I will be alive to share our opinions. In the mean time no Earthling possesses anything on Mars or any other extraterrestrial body. The IAU is the recognized international organization that names features on other planets and moons. If you want to change the rules, you should join the IAU and get appointed to the relevant working group.