Danger Signals From the Sun 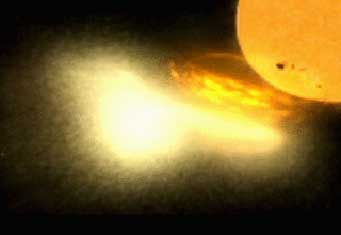 This still from a NASA animation shows a CME before it showers Earth and Mars's magnetic fields. To see the full movie, visit the NASA press release.

Coronal Mass Ejections (CMEs) happen when the Sun hurls a billion tons of electrically charged gas particles into space. The strongest of these events produce a radiation storm that can disrupt or damage Earth satellites. Worse still, an astronaut hit by one of these storms could suffer radiation sickness, cancer, or even death. Last week, scientists at the American Astronomical Society conference in Honolulu presented a way to predict which type of CME is coming before it hits: a harmless discharge or lethal radiation storm.

While most of the particles striking the Earth are harmless, producing beautiful displays of the northern and southern lights (aurora borealis and australis), the violently expelled CMEs can create a shock wave in the gas that normally blows from the Sun — the solar wind. A strong enough shock wave supercharges the solar wind, dramatically accelerating its electrically charged particles and creating a shower of harmful radiation particles.

Natchimuthuk Gopalswamy (NASA/Goddard Space Flight Center) and others analyzed CMEs observed by the SOHO and Wind spacecraft between 1996 and 2005 and found that only 1–2% resulted in particle storms. SOHO took visual films of the some 10,000 CMEs, while Wind listened for their radio waves. 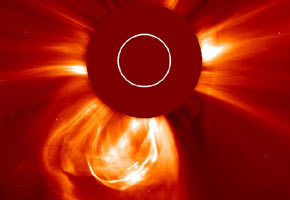 A titanic bubble of superheated gas erupts from the Sun's surface on February 18, 2002. This extreme-ultraviolet image was recorded by the Solar and Heliospheric Observatory.

The key is radio waves. Aside from accelerating a solar wind’s atomic nuclei, a strong CME shock can also cause the accelerating electrons to convert part of their energy into electromagnetic radiation at radio wavelengths. These low-frequency radio waves travel at the speed of light and reach Earth in about eight minutes. Meanwhile, their corresponding particles arrive anywhere from minutes to hours later. The CMEs that produce this radio emission are called radio loud (those that don’t are called radio quiet), and scientists think it’s the loud ones that cause the radiation storm.

While the dangerous CMEs were all fast-moving, scientists noted that most of the radio-emitting CMEs they detected originated from the solar equator that faces Earth, while the ones without radio waves came from higher or lower latitudes of the Sun. This indicates that the distinction between fast radio-loud and quiet CMEs may be due to geometry and that an efficient radio detector would have to be between an astronaut and the Sun, not just on Earth.