Dark Matter Gets a Reality Check 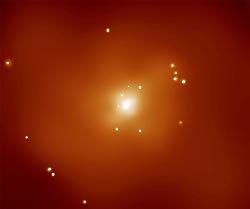 The galaxy NGC 720 is embedded in a large halo of thin, hot gas (red glow), revealed in this 5-arcminute-wide image taken by the Chandra X-ray Observatory.

Most of the matter in the universe truly is invisible, as astronomers have long been saying, according to a new result from the Chandra X-ray Observatory. Chandra has found evidence of dark matter exerting gravity in a way that cannot be accounted for by any other explanation — not even by modifying the law of gravity itself, as some physicists have suggested.

For 69 years astronomers have become increasingly convinced that the universe is full of some kind of unseen matter. The stars, gas, and dust that we see (or detect at X-ray, radio, or other wavelengths) don’t add up to nearly enough mass to make galaxies rotate as fast as they do, or to make galaxy clusters hold together as tightly as they do, or to bend light from distant background sources as much as observed, or to account for various other effects. Roughly seven times more stuff must be out there exerting gravity to do these things. There’s excellent evidence that most of this dark matter exists in the form of exotic particles not yet discovered in any physics lab.

Back in 1983, Mordecai Milgrom (Weizmann Institute, Israel) proposed another explanation. Maybe the law of gravity itself breaks down and behaves strangely where gravity becomes very weak, such as on the outskirts of galaxies and among galaxy clusters. Could Newton’s equation of gravity be rewritten to account for all observations with no dark matter at all? Milgrom's theory of Modified Newtonian Dynamics, or MOND, ran into problems, but some physicists have continued to work on it as a possible dark-matter alternative.

However, there’s no way it can explain the gravity field around the galaxy NGC 720 in Cetus, say David Buote (University of California, Irvine) and several colleagues in the September 20th Astrophysical Journal. Using Chandra, they found a large cloud of thin, hot gas surrounding the galaxy. The cloud’s shape and orientation mean that it has to be held together by the gravity of a dark-matter halo that simply does not match the visible galaxy's shape — no matter how the law of gravity is tweaked.

As with other galaxies (including the Milky Way), the dark-matter halo around NGC 720 contains 5 to 10 times the mass of the visible stuff. Astronomers hope such observations will narrow down how dark matter behaves and what it might be. Buote’s team says their work indicates that it consists of slow-moving ("cold") particles that, unlike in a normal gas, do not collide or interact with each other or with ordinary matter in any way except by their gravity.