Scientists have found a dark-matter filament, a strand of the cosmic web that connects clusters of galaxies. It's the first time an individual filament has been detected and is among our first observational glimpses of the universe’s largest structures.

Under good viewing conditions, the density of stars in the nighttime sky is roughly the same at any location, save along the Milky Way’s thin celestial streak. It's tempting to extend that uniformity outward and picture the cosmos as a uniform sea of galaxies. But on the largest scales the universe is arranged not as a sea but in a vast web, with galaxies clustered along gossamer threads of dark matter. 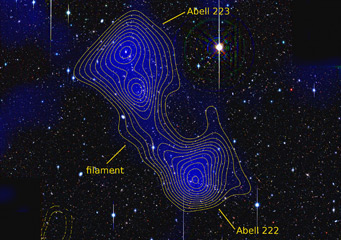 The blue shading and yellow contours in this image represent changes in matter density between the galaxy clusters Abell 222 and 223 (which is actually two clusters itself). The filament is shown end-on; the cluster Abell 222 lies about 59 million light-years beyond its partner. Click for a larger view.

While scientists have detected hints of dark matter’s network and shown that the web’s intersections closely align with the positions where galaxies bunch into clusters, the dark-matter strands that theoretically link clusters have remained undetected. But cosmologist Jörg Dietrich (now at University Observatory Munich) and an international team of scientists announced this week in Nature that they have detected a dark-matter filament connecting the two main components of Abell 222/223, a galactic supercluster system in the constellation Cetus roughly 3 billion light-years away.

Although scientists theorize that dark matter makes up about 80% of everything in the universe, it’s exceedingly difficult to detect. Unlike normal matter — the stuff of stars and planets and people — dark matter is unaffected by electromagnetic radiation, so it's invisible. Scientists searching for it have to infer its presence from its gravitational effects.

Dietrich and his colleagues exploited a phenomenon called weak gravitational lensing to find their cosmic filament. When light passes a massive object, the light’s path bends a little as the photons travel through the spacetime dip the object creates. Dietrich found these distortions in light emitted by galaxies behind Abell 222/223, a sure sign of an additional collection of mass in the foreground. But all the researchers could see between the clusters was a hot, wispy gas cloud, not nearly massive enough to lens the light.

(Such gas makes up a large part of the universe’s normal matter, which is so thinly spread that it often eludes detection, Dietrich and his colleagues suggested in 2008 when observing this same cluster complex.)

Combining observations from the Subaru telescope in Hawaii and the XMM-Newton space telescope, Dietrich’s team calculated that the gas cloud accounted for at most 9% of the mass in the area. The remainder, Dietrich says, is dark matter. 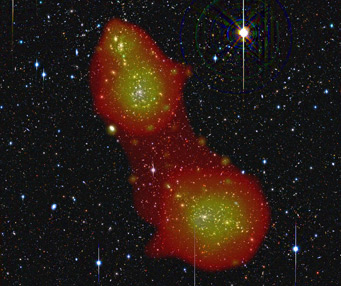 This composite X-ray and optical image shows the cloud of hot gas between Abell 222 and Abell 223. The gas has been gravitationally attracted over billions of years to the dark matter in the underlying filament.

The cosmic web's individual strands are difficult to detect not only because dark matter is invisible, but also because it's so diffuse. The filaments are roughly tube-like in shape, and most are oriented vertically from our perspective, so we look through their short dimension instead of along their length. But the strand connecting Abell 222 and Abell 223 happens to be pointing along our line of sight, so we look straight down the barrel. This orientation puts more material between us and the light sources beyond the clusters, which enhances the lensing effect and makes the dark matter detectable.

Such specific orientations are rare, which may explain why the filaments have gone undetected until now. But Dietrich has high hopes that similar discoveries lie just around the corner. "We are in a great age of observational cosmology," he says, adding that data from the Sloan Digital Sky Survey and the upcoming Dark Energy Survey will "vastly expand the catalogs of galaxy clusters."

While Abell 222/223 contains hundreds of galaxies, the largest clusters contain tens of thousands. Pairs of clusters within these larger groups are likely to be connected with dark-matter filaments. As our observations peer deeper into the universe, cosmologists' chances increase for uncovering the elusive threads of the cosmic web.

Dark matter is the stuff required for the big bang to work, i.e. to create the universe. Without dark matter, what happens to the big bang model in explaining the origin of galaxies? Perhaps the Higgs boson or Higgs field will explain the origin and properties of dark matter or perhaps not. We know that in the solar neighborhood, dark matter cannot be measured or detected like this report shows for Abell 222 and Abell 223: 'Serious Blow to Dark Matter Theories? New Study Finds Mysterious Lack of Dark Matter in Sun's Neighborhood' http://www.sciencedaily.com/releases/2012/04/120418111923.htm

I just want to take a moment to express how much I enjoy your writing style. It's, for lack of a better word, linear. One idea logically flows from the one before it. It's clear, concise, uncluttered. Thank you.

Compare this quote from Stephen Craft’s article, “on the largest scales the universe is arranged not as a sea but in a vast web, with galaxies clustered along gossamer threads of dark mater” with something Isaiah wrote about 2,750 years ago, “There is One who is dwelling above the circle of the earth … the One who is stretching out the heavens just as fine gauze.” (Isaiah 40:22) How did Isaiah know both that the earth is round and that the universe is threadlike?