No asteroid has ever appeared as large as 1 arcsecond across in a telescope. If it did, it'd be awfully close to Earth and you might have more to worry about than getting a good look with your telescope. 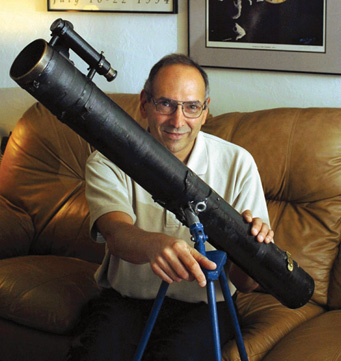 Contributing editor David H. Levy has been writing his "Star Trails" column for Sky & Telescope since January 1988. His book of the same title appeared this year. He has also discovered or codiscovered 22 comets, including the famous Jupiter-collider, Shoemaker-Levy 9.

Still, Earth-based observations can tell a lot. For many years, amateurs have joined expeditions to watch asteroids pass in front of stars and thereby determine their sizes and shapes. And lately, advanced amateurs have used their backyard scopes for crucial measurements of asteroids' subtle brightness variations to learn their rotation rates — and more.

Imagine the surprise of S&T contributing editor David Levy when he learned last week that main-belt asteroid 3673 Levy (named in David's honor back in 1988) has its own little moon!

This unexpected bonus grew out of careful light-curve measurements made by Don Pray of Greene, Rhode Island, and several others under the wing of Czech asteroid expert Petr Pravec. During December 5–9, Pray was taking repeated CCD images of 3673 Levy with the 20-inch f/4 reflector at his Carbuncle Hill Observatory and plotting magnitude measurements to see if any pattern emerged. The most obvious feature was a smooth and regular fluctuation of 0.13 magnitude, clearly revealing that the asteroid was turning on its axis every 2 hours 41.3 minutes. But a few other dips also occurred, allowing Pravec's team to conclude that the asteroid had a satellite alternately passing in front of and behind the main body.

Hardly anything is yet known about 3673's little companion, except that it's about 28% as large as the primary and orbits every 21.6 hours. Observations in coming months will surely tell more.

"We've been finding roughly 15% to 17% of our targets are binaries," Pray notes, adding that this could be an important statistic for those planning how to destroy Earth-approaching bodies in the future. It's hard enough to take out one asteroid — what if there's another right beside it, on the same inbound trajectory!

Thank you for your Articles, Asteroids are amazing, N.E.O. near earth Orbits!

I suggest a Great set of Hard Sci-Fi Books, for those of you out there, that Like Space Exxploration along with Fact in a Sci-Fi series. It starts with

Thanks again and You all inspire the creative in all of us!