After gently cruising through interplanetary space for almost four years, Dawn, NASA’s asteroid probe, has finally entered orbit around its first destination, asteroid 4 Vesta. The arrival marks the beginning of a year-long study of the second-largest object in the belt of rocky bodies between Mars and Jupiter. 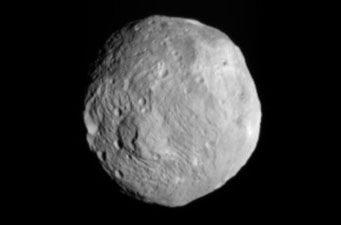 Although the spacecraft relayed engineering data to confirm its arrival, the precise time of achieving orbit won't be known until the object's mass can be determined accurately. (A higher mass means that orbit was achieved sooner than the estimated time of 1 p.m. EDT on July 16th,while a lower mass would correspond to a later time.)

Earlier NASA released an image of Vesta taken on July 9th, when Dawn was only 26,000 miles (42,000 km) from the asteroid. As chief engineer Marc Rayman noted earlier this month, the spacecraft's destination looks, "wrinkled, ancient, wizened, with a tremendous amount of character that bears witness to some fascinating episodes in the solar system's history."

Launched on September 27, 2007, Dawn carries high-resolution cameras, spectrometers, and other instruments to investigate the true nature of two alien worlds: Vesta and 1 Ceres. After exploring Vesta for a year, Dawn will set sail for Ceres in late 2012. Scientists believe that these two objects, which formed early in the life of the solar system, carry important clues to the formation of the terrestrial planets.

What we know about Vesta is fascinating but incomplete. Images from the Hubble Space Telescope reveal that the object was pummeled early in the history of the solar system. Radioisotope studies of meteorites presumed to be fragments of Vesta show evidence that the object accreted in a span of 5 to 15 million years, possibly in the same manner as the terrestrial planets. Then it got hot enough (due to the decay of radioisotopes in its interior) to melt at least partially . Researchers believe that Vesta might have an iron-nickel core and a metal-rich mantle beneath its rocky exterior. 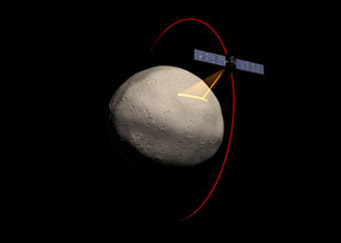 Dynamicists will use measurements of Vesta's influence on the craft's motion to determine the asteroid’s mass and deduce the distribution of mass in its interior. And as Dawn dips closer and closer to Vesta’s surface to make these measurements, the spacecraft will also send home some of the best pictures of the asteroid.

Initially the craft will hover about 9,000 miles from the surface. Then, in mid-August, Dawn’s ion propulsion system will reduce the separation to about 2,800 miles, and then to only 110 miles early next year. The resolution of the pictures will increase from about 500 m per pixel in late July to about 30 m per pixel in 2012.

Dawn’s science team has extended the scope of the mission, and is even planning to look for moons.

Fortunately for observers, the Dawn's arrival happens at a time when Vesta is readily visible through binoculars and telescopes. It now shines in Capricornus at magnitude 6.0, almost as bright as it ever gets. The only bad news is that the just-past-full Moon is also in Capricornus, brightening the sky tremendously.

For Northern Hemisphere observers, Vesta climbs to a point fairly low in the southeast by midnight, rising higher in the hours before dawn. You can pinpoint its location using our finder chart. Of course, even the most powerful backyard telescope will only reveal Vesta as a simple point of light — and the spacecraft is far too small to spot across such a huge distance.

I think you made a mistake in second paragraph.