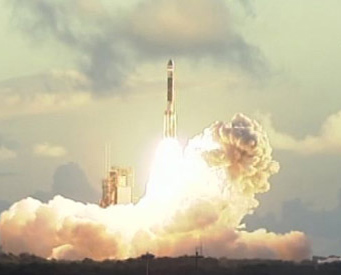 After a seemingly endless string of delays and threats of cancellation, the Dawn spacecraft left Earth atop a Delta II rocket on September 27, 2007. Its target: the large asteroids Ceres and Vesta.

Dawn will be the first spacecraft to orbit two different asteroids, 1 Ceres and 4 Vesta — a pair of primordial bodies between Mars and Jupiter that each had the potential to grow to Earth’s size. By studying them, scientists hope to learn more about the formation of the solar system.

"It’s a chance to see the earliest stages of how planets evolve," says Richard Binzel, a professor of planetary sciences at MIT. Studying these asteroids is "a way of looking at the early stages of Earth, the Moon, and Mars."

Ceres, with a diameter of 590 miles (950 km) and the only IAU-designated dwarf planet in the asteroid belt, and Vesta, about half the size of Ceres and the second most massive asteroid in the region, are polar opposites. Ceres probably still has water on or just below its surface. Meanwhile, Vesta more closely resembles a rocky world like Mercury. It has a hot and dry history, heating up and melting many times to yield a waterless surface covered in lava flows.

Vesta is a mystery because, as Binzel notes, it’s “the only big asteroid that looks like it has lava flow.” Sizable impacts have left Vesta misshapen and chipped off countless pieces — some of which have likely landed on Earth as meteorites. Unusual due to their basalt composition, these meteorites are about 4½ billion years old.

Dawn will arrive at Vesta in October 2011 and spend seven months orbiting the asteroid. It will get to Ceres in February 2015 and remain there indefinitely.

The tractor-trailer-size spacecraft will use three instruments: a camera for taking pictures and navigating, a visible and infrared spectrometer to assess mineral compositions on the surfaces, and a combined gamma-ray and neutron spectrometer to tell what elements (including water) lie within the rocky bodies.

Dawn’s unconventional rocket creates a steady stream of xenon ions accelerated to 78,000 mph by powerful electric fields generating from its enormous solar-cell panels. This kind of ion propulsion has been used before (such as on the Japanese craft Hayabusa). Although the resulting thrust is weak — it takes 4 days to go from 0 to 60 miles per hour — xenon-ion thrusters can fire continuously for weeks and months at a time. Dawn carries 935 pounds (435 kg) of xenon, enough to change its velocity by nearly 7 miles (11 km) per second as it navigates around the solar system.

The Dawn mission has actually been canceled twice by NASA — in December 2003 for two months and again in March 2006. The second axing was withdrawn less than a month later after a review and a vocal protest from planetary scientists and Congress.