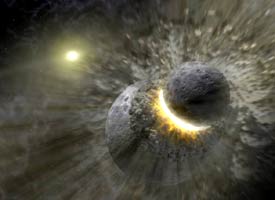 An artist depicts the collision of two planetesimals in the disk around Vega. Such collisions, which generate huge amounts of dust, occurred frequently in the early days of our solar system's Kuiper Belt.

One team, led by Kate Y. L. Su (University of Arizona), used the Spitzer Space Telescope to image the disk around Vega in the mid-infrared with unprecedented sensitivity. Su and her colleagues found signs that much of the disk material is in the form of dust grains just a few microns across. Stellar radiation pressure should blow such small grains out of the system in short order, so Su's team suspects they come from recent collisions.

"With Vega, we think that we're seeing the aftermath of a massive collision," says Su. According to this scenario, two or more 1,000-kilometer-wide bodies collided and fragmented sometime in the past million years. Since then, the fragments have been colliding and breaking one another up into smaller pieces, all the way down to the observed dust grains. The tiny particles extend at least 815 astronomical units (about 20 times the average Pluto-Sun distance) from Vega, making the disk four times larger than previously suspected. At a given distance from a star, smaller grains tend to be hotter than larger ones. The Spitzer observations show that Vega's disk is too hot in its outer reaches to be made of large grains only. 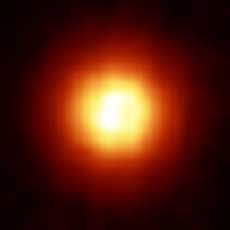 The Spitzer Space Telescope images the Vega disk at an infrared wavelength of 70 microns. The disk contains an excess of small dust grains, which probably came from a collision of two planetesimals.

A second team, led by Charles M. Telesco (University of Florida), has found evidence for a collision of 100-km objects around Beta Pictoris just 100 years ago or so — adding new detail to a finding by Yoshiko K. Okamoto announced last October. Previous observations had shown symmetrical clumps on either side of the star, leading astronomers to interpret them as opposite sides of a ring seen edge-on. But Telesco's team's higher resolution images, taken in infrared light at the 8-meter Gemini South Telescope in Chile, show just one clump on one side of the star. The clump's temperature suggests it contains a lot of 0.1-micron dust grains, even smaller than those seen around Vega. As in that system, radiation pressure should blow these smaller dust grains away. "The most obvious and intuitive explanation for this observation is that the grains were created recently in a massive collision," says team member Mark Wyatt (Royal Observatory, Edinburgh, Scotland).

Astronomers have long assumed that much of the dust in circumstellar disks comes from ongoing collisions of asteroids or comet-like bodies. But the Spitzer observations are the first to show evidence of a relatively recent collision between Pluto-size objects. Even a collision of 100-km objects, as is implied for Beta Pictoris, is impressive, and astronomers have not previously seen evidence of a smash-up of that scale occurring so recently. 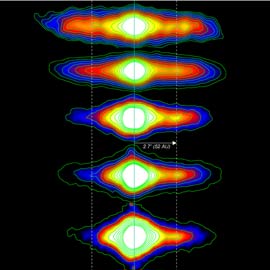 The Gemini South Telescope imaged Beta Pictoris's disk at several wavelengths. The clump on the right side of the disk in each image probably contains dust grains from a recent collision.

Wyatt says that these massive collisions must be more frequent than expected, which in turn means there must be more bodies around these stars than previously assumed. Based on their findings, both teams suggest that circumstellar dust disks probably change dramatically in appearance on relatively short timescales, with massive collisions periodically brightening the disks. Both teams presented their results this week at the American Astronomical Society meeting in San Diego.