Jupiter's Great Red Spot has always been the granddaddy of storms in our solar system. But for the past six months, the more exciting action for planetary observers has been a storm raging on Saturn. 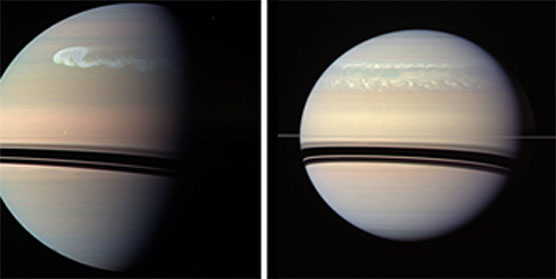 Images from Cassini taken on December 24th last year (left) and May 15th (right) show the progress of a massive white storm in Saturn's atmosphere. North is up.

Back on December 5th, instruments aboard the Cassini spacecraft picked up radio and plasma-wave signals from a thunderstorm brewing in the planet's northern hemisphere. Only three days later, amateur Sadegh Ghomizadeh in Iran spotted a new white atmospheric disturbance on the planet. It rapidly grew in an east-west direction from its vertex at 41° north latitude; within a month it was spanning 100° of longitude.

Since then amateur and professional scopes have been tracking the evolution of one of the largest storms ever reported on Saturn. Amateur-stacked video images and high-resolution pictures from Cassini, taken as recently as May 15th, show white cloudy material wrapped around the northern hemisphere and spanning 30° of latitude.

Storms of this magnitude seem to occur once every Saturnian year (29½ Earth years). During these events, gases from deep in the troposphere boil up into the lower stratosphere, causing large temperature changes that disrupt the subtle seasonal patterns on the planet and modify the chemistry of the upper atmosphere.

At center and on the right are thermal infrared images of Saturn from the mid-Infrared VISIR instrument at the European Southern Observatory's Very Large Telescope on Cerro Paranal, Chile. At left is an amateur visible-light image from Trevor Barry of Broken Hill, Australia. The images were obtained on Jan. 19, 2011, during the mature phase of the northern storm. The second image was taken at 18.7 microns, a wavelength that reveals heat coming from below and shadowy structures blocking it in Saturn's lower atmosphere. The third image, taken at 8.6 microns, is sensitive to higher altitudes in Saturn's normally peaceful stratosphere, where we see the unexpected beacons of infrared emission flanking the central cool region over the storm.

Such spectacular sights have been observed only five previous times since 1876. Until now they could be studied only in reflected sunlight. This time, however, not only do we have a spacecraft on the scene but astronomers on the ground can probe into the atmosphere at infrared wavelengths. Data from the Composite Infrared Spectrometer (CIRS) on Cassini, and thermal imaging from the Very Large Telescope (VLT) at Chile, have presented a team of scientists led by Leigh Fletcher (Oxford University) an unprecedented opportunity to quantify the changes in Saturn's stormy zones.

Two spectroscopic readings by Cassini — the first taken last October 22nd (well before the storm began) and the second on January 19th (45 days after its onset) — show a 7K to 9K drop in temperature. Thermal imaging shows that the cloud upheaval causes a darkened cold spot over the 3,000-mile-wide vortex and warms areas around the periphery . Over the storm's head, the airmass appears streaked with warm zones, dubbed stratospheric beacons.

As clouds continued to spew upward into the stratosphere, atmospheric layers were being displaced by about 20 ± 5 km over the heart of the storm, and 10 ± 4 km at its outer margins. These displacements churned the gases in the planet's atmosphere violently, causing, for instance, a depletion of acetylene (C2H2), a tracer for stratospheric motion, over the heart of the storm. Phosphine (PH3) showed a sudden enhancement of 20% in the stormy zones. Fletcher's team concludes, "The thermal contrasts resulting from the planetary-scale disturbance have a considerable affect on atmospheric motion."

While only the broadest picture is within the reach of amateur telescopes, it's exciting to peek beneath the blanket of stormy clouds on Saturn by way of images from more powerful instruments. And the show won't end soon — scientists believe that the uplift vortex will linger for a few years and continue to present a visible white spot long after most of the storm loses its steam.