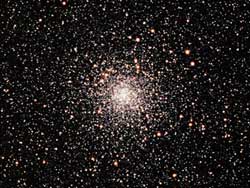 Globular star cluster NGC 6397 lies 7,500 light-years away in the constellation Ara. It may have spawned new stars when it passed through the Milky Way 5 million years ago.

Two astronomers have made a surprising and unsuspected cosmic connection by suggesting that a naked-eye open star cluster in Scorpius was spawned by the action of a binocular globular cluster in the neighboring constellation Ara. Richard F. Rees Jr. (Westfield State College) and Kyle M. Cudworth (Yerkes Observatory) propose that when the 6th-magnitude globular NGC 6397 passed through the plane of the Milky Way some 5 million years ago, it triggered the formation of the open cluster NGC 6231, which marks the core of the large Scorpius OB1 Association. Rees and Cudworth presented their proposal at the 203rd meeting of the American Astronomical Society on Wednesday.

Astronomers have a fix on both the proper motion (movement on the sky) and radial velocity (motion along our line of sight) of NGC 6397, thus providing a complete, 3-D picture of the globular's path through space. It is currently about 7,500 light-years from us and 1,500 light-years south of the Milky Way's plane. Its trajectory must have plunged it through the Milky Way's disk about 5 million years ago. Rees and Cudworth determined the current position of the crossing point, which has since been carried along by galactic rotation. At the calculated spot, much to their surprise, they found the 5-million-year-old open cluster NGC 6231, which consists of some 120 stars of 6th to 8th magnitude.

Back in 1996, John Wallin (George Mason University) first suggested that the gravity of passing globular clusters could trigger the collapse of marginally stable gas clouds — and subsequent star formation — when they dive through the disk of the galaxy. Although there is still some uncertainty about the distance of NGC 6231, Rees and Cudworth may have identified the first case of this remarkable process. "We'll certainly study other globulars that recently crossed the galactic disk, to see if they also left their marks," says Rees.

Other astronomers say the idea is not as crazy as it sounds. "It could be true," says Peter J. Teuben (University of Maryland). "When a massive globular cluster zips through the plane of the galaxy at high speed, it has to have some effect." However, he warns that this is certainly not the predominant way of forming open clusters. Rees agrees: "At most, this process constitutes a small contribution to the origin of open clusters in our Milky Way." To find out whether or not NGC 6397 really begat NGC 6231, Rees hopes that future astrometry space projects like NASA's Space Interferometry Mission and Europe's GAIA will provide better data on the distances and the proper motions of each cluster.