A California startup seeks to democratize space research by putting a tiny, custom-built satellite into orbit — and letting the public decide how to use it.

Space-based research is expensive, complicated, and time-consuming. Just look at the James Webb Space Telescope, which has been under construction for nearly a decade and whose budget has swollen to almost $9 billion. These things will always be run by governments and corporations. 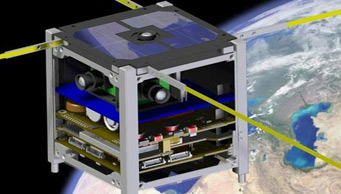 Designers plan to put ArduSat into a low-Earth orbit, at about 600km. The diminutive satellite will gather power with solar panels, two of which are cut away in this illustration to show its stacked Arduino hardware and cameras.

Maybe not. A small team of scientists and engineers is trying a new approach to space science — a model that takes its cues, and its funding, largely from private individuals. They propose to put a 1-kg satellite called ArduSat into space, and to make its sensors available to anyone who made a minimum contribution to the project piggybank.

NanoSatisfi, the startup company behind the effort, is based at NASA's Ames Research Center in California (though NASA has no formal ties to the project). Last month, the group started a fundraising campaign on Kickstarter, a website that solicits donations from the general public. Their initial target was $35,000. When the campaign wound down last Sunday, the tally stood at $106,330.

Those donations came from 676 backers around the world. The single largest contribution came from CatN, a British internet hosting company that paid $10,000. But the majority of donations were from private space enthusiasts, says Jeroen Cappaert, an aerospace engineer on the NanoSatisfi team.

Those who paid at least $325 have the chance to design a custom experiment using ArduSat's sensors. (Smaller contributors can use the satellite to take pictures or broadcast a personal message.) If the project is successful, it will be the first crowdsourced science mission in space. 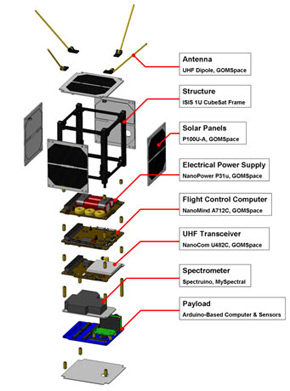 ArduSat will contain more than two dozen sensors, a flight-control computer, communications systems, a rechargeable battery, and radiation shielding. The cubic package will be 10cm on a side and will weigh about 1kg. Click for a larger view.

This custom experimentation is possible because ArduSat will be built on Arduino hardware — inexpensive, programmable circuit boards popular with electronics hobbyists. That hardware will be tied to more than two dozen instruments packed into a package just 10 cm on a side. Planned equipment includes a magnetometer, a Geiger counter, a spectrometer, an infrared camera, a CO2 sensor, and more.

All that equipment is relatively low-tech. For example, Ardusat's optical camera will see at a resolution about 27 times lower than Landsat, the satellites responsible for much of the imagery in Google Earth. But NanoSatisfi emphasizes that the technology itself is not the point — it's getting space research into new hands.

Projects suggested so far include measuring ozone levels, observing weather, watching for meteors, and taking spectra of bright stars and planets. NanoSatisfi will test custom experiments using prototypes in the lab and launched on a high-altitude balloon and a suborbital rocket.

ArduSat is based on the 13-year-old CubeSat design, dozens of which are already in orbit taking measurements for governments and universities. Many CubeSats made the trip to space by stowing away with larger satellites: Last year, six CubeSats rode with NASA's environmental-observation NPP satellite, and seven more made the trip on an ESA rocket last March. How ArduSat will make it into space has yet to be determined, but Cappaert says his group is in talks with several potential launch partners around the world, including governments and commercial ventures.

Assuming a successful launch, ArduSat will run about 15 experiments per week during its 18- to 24-month lifetime. The satellite will beam the results of each experiment back to Earth, where they will be sent to the person who designed the test. ArduSat's low orbit will eventually degrade, and the device will burn up in the atmosphere.

There remain a lot of unknowns, and many things need to go right to make this mission a success. NanoSatisfi has to build a satellite that will survive not only the rough trip to space, but also the harsh environment it will find once it gets there. The tiny package doesn't allow room for backup components, so both the hardware and the proposed experiments have to be tested exhaustively. And the launch itself has to go smoothly — a factor outside NanoSatisfi's control, but one that has spelled a premature end for many previous CubeSat missions.

For now, in addition to vetting experiments and construction, the team is also working out how best to spend the extra $65,000 their Kickstarter campaign netted. Ideas include expanding the dimensions of the existing satellite, or building additional ones.

Cappaert says if all goes well, the team hopes to have ArduSat in orbit in about a year. If successful, ArduSat may open the doors to further crowdsourced missions, bringing space science into yet more hands — possibly even yours.

This is an interesting project, and I wish the nanosatisfi team and their various funders success with this mission. But this article's lead paragraph's characterization that nanosatisfy is seeking to "democratize space research" deserves scrutiny. In the United States we have a representative democracy. Every adult citizen gets to vote for our representatives, and (in theory at least) every individual and business pays taxes on our income, and then our representatives decide how to spend public funds to promote the general welfare. As Winston Churchill said, democracy is absolutely the worst way to organize a society, except when compared to all the alternatives. A privately financed enterprise is not democratic. People who contribute more money have more say on what gets done, and people who are unable to contribute have no input. Let's not conflate capitalism and democracy. In the US today, the top 1% of the population owns 37% of the wealth, and the top 20% owns 88%, the highest such percentages in modern history. As wealth becomes more and more concentrated in fewer and fewer hands, and as an anti-democratic, anti-government ideology takes hold, our public infrastructure -- everything from our roads to our public universities to NASA -- is deteriorating at an alarming rate. Crowd-funded private satellites are an interesting innovation, but please don't imagine that they're democratic in any sense of the word.

The amateur radio community is far ahead in this area and actually have several satellites in orbit. The satellites are open to any licensed operator (aka ham) to use at any time they are overhead and you can communicate with just about anyone on your side of the globe. Amateur radio operators also engage in moon bounce where we transmit signals and bounce them off the moon and back to earth. Look up amsat.org.

Kickstarter's catalog is still 90% art, music and film projects. FundaGeek is expressly for scientific research and technology. Plus, FundaGeek does not follow the "all or nothing" funding model for research projects. To learn more, please visit: http://www.fundageek.com/research