It’s been a month since skywatchers in the Eastern Hemisphere were treated to the longest, deepest total lunar eclipse in decades. Many observers carefully monitored the Moon’s darkness as it coursed through the center of the umbra — the darkest part of our planet’s shadow. It’s been realized for years that the amount of cloudiness along Earth’s limb can affect the darkness of the umbra. But could the umbra’s darkness be accentuated by pollution in our atmosphere? 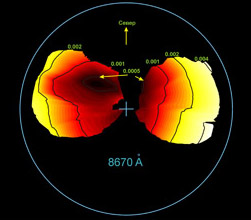 A photometric plot of the umbra from the June 15, 2011, total lunar eclipse, showing how the near-infrared brightness the eastern (left) part of the shadowed disk differs from theoretical predictions.

O. Ugolnikov and I. Maslov

During June’s event, a trio of Russian astronomers took photometric measurements of the eclipsed Moon and found that the western part of the umbra was as dark as expected, while the eastern part had regions of varying darkness that didn’t match theoretical predictions. The team took measurements using CCD cameras equipped with visible and near-infrared filters centered on 501, 673, and 867 nm.

This unusual pattern of shadows aligned with the glancing path that sunlight took over eastern China, when it interacted with “aerosol pollution,” according to coauthor Oleg Ugolnikov of Moscow’s Space Research Institute.

The umbra’s unusual appearance stems from the way light from the Sun passes through Earth’s atmosphere — specifically, the troposphere, which extends as high as 12 miles (20 km) above sea level. In this region, sunlight interacts with air molecules and is thrown of its original course. This process, called Rayleigh scattering, is what causes Earth’s sky to appear blue, because short-wavelength sunlight is scattered most readily by atmospheric gases. Longer-wavelength red light, however, is relatively unaffected, so it passes through Earth’s atmosphere relatively unimpeded and then paints the surface of the Moon with the distinctive ruddy hues seen during totality. 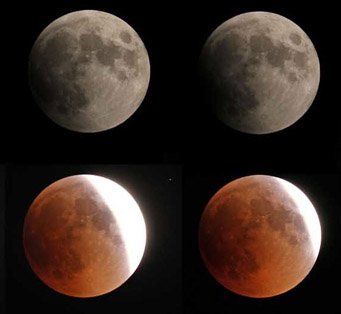 Images of the Moon taken during the June 15, 2011, total lunar eclipse. Click on image for a series of eclipse photos.

The tiny aerosol particles that make up smog can also affect sunlight. They produce Rayleigh scattering when the particles are smaller than the wavelength of light — and Mie scattering when they’re larger. The more light that’s lost this way, the less of it that makes it all they way to the Moon during totality. The skies over China were largely cloud-free at the time of the eclipse. So, according to Ugolnikov’s team, their evidence suggests that the heavily polluted air over China is responsible for the darker-than-expected shadow on the eastern side of the Moon. By contrast, even though the sunlight that leaked into the western part of Earth’s shadow passed through the atmosphere over densely populated Spain and Portugal, the umbra showed no signs of "unusual darkening," says Ugolnikov.

The Russians, however, aren’t the only scientists learning how Earth’s atmosphere affects the darkness of the umbra. In a recent paper, Antonio García Muñoz and Enric Pallé, astrophysicists at La Laguna University in Spain, explore how different atmospheric conditions affect lunar eclipses. “Aerosols injected by volcanic eruptions and large wildfires can cause a significant darkening of an eclipse,” says García Muñoz. In fact, “Scattered sunlight may represent a significant fraction of the sunlight that reaches the eclipsed Moon under conditions of high aerosol content in the atmosphere.” García Muñoz and Pallé also show that air containing background levels of aerosols will scatter sunlight 10 times more efficiently than air with no aerosols, but that increased aerosol levels do not necessarily increase the amount of scattering.

But the link between air pollution and dark umbras has not been definitely established. “The Russians’ manuscript shows only three images that can each be seen as a snapshot of Earth’s atmosphere,” says García Muñoz. “It would have been nice to have a sequence of images. Such a sequence would give important clues on the time-scale for variations of some of the structures observed.” Also air pollutants usually remain within the bottom 1 or 2 km of the troposphere, much lower than the 5- to 6-km altitudes that he and Pallé find most responsible for causing the umbral glow.

Other atmospheric events, like large airborne dust clouds, might bear some of the responsibility for the unusually darkened shadow last month. “The best explanation is indeed the aerosol pollution over China, but we cannot rule out the presence of an episode of desert sands transported over Asia,” says Jean-Baptiste Renard of the University of Orleans in France. He adds that observations during lunar eclipses might prove to be an inexpensive way to provide a survey of air pollution on a continental scale.

There is a growing recognition that scattered light — not refraction — causes much of the red-tinted moonshine we see during a lunar eclipse. “Most of the photons that make it to the eclipsed Moon are scattered from tropospheric altitudes,” says García Muñoz. That scattering occurs more often when the atmosphere has been loaded with aerosols, like those spewed out by volcanic eruptions. All of this recent research suggests that the traditional (refraction-based) model of how the Moon glows during lunar eclipses may have to be revised.