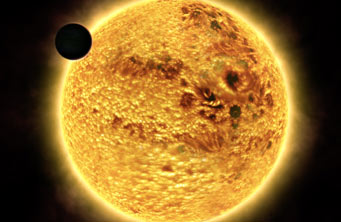 This artist's concept shows what sunspot-ridden HD 189733 might look like in hydrogen-alpha light. The star is an active, type-K1 dwarf somewhat smaller and dimmer than the Sun. Its Jupiter-size planet is just starting to transit its face. The planet's dusty upper atmosphere filters a tiny fraction of the star's total light we see.

Two new studies have probed the same exoplanet's atmosphere, with opposite results.

The star HD 189733 is an orange dwarf glimmering at magnitude 7.7 in Vulpecula 63 light-years away. If you're an amateur telescope user, you've probably seen it many times without knowing it. The star lies in the same field as the Dumbbell Nebula, M27, just ¼° to the nebula's east. A Jupiter-mass planet orbits the star very closely every 2.2 days, as revealed by the star's radial-velocity wobble and also by a slight dimming every time the planet crosses in front of its face. (Details). 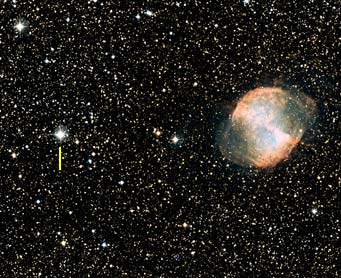 Obscure little HD 189733 (above yellow tick) shines at magnitude 7.7, 1/4° east of the Dumbbell Nebula in Vulpecula. Good binoculars will show it. Vulpecula, near Cygnus, is currently well up in the western sky right after dark. Click image for wider view.

A team of astronomers used a spectrograph on the Hubble Space Telescope to to examine the star with and without the planet in front of it. The difference revealed evidence about the tiny fraction of light that skimmed sideways through the planet's upper atmosphere on its way to us. Spectral evidence of sodium, potassium, and water were expected — but not seen.

The team says that the best explanation for this lack of spectral features is haze in the planet's upper atmosphere that keeps light from passing freely through lower layers. Such a haze is indeed expected for hot planets (this one should be about 800° Celsius), consisting of iron, silicates (rock dust) and/or aluminum oxide (sapphire dust). The astronomers present their full report in the Monthly Notices of the Royal Astronomical Society. NASA and the European Space Agency issued a press release this morning.

On the other hand, astronomers using the ground-based but much larger Hobby-Eberly Telescope in Texas did the same project — and barely detected sodium absorption lines in the planet's upper atmosphere. Press release.

this result is curious in the light of another recent result (last week) for this system which used ground based observations with the HET (Hobby-Eberly Telescope) to make the first ground based detection of Sodium in the atmosphere of HD189733b. The results with the HST would be inline with those obtained earlier for HD209458b, which also failed to detect alkaline metals in the atmosphere.

Clearly one of the teams got it wrong, or is there a way to reconcile the observations ?