Last September, when a tiny asteroid drifted into Earth’s vicinity, our planet’s gravity captured it. The meter-size object, designated 6R10DB9, is now making its third wide swing around Earth. It was quite faint, magnitude 19.3, when discovered September 14th with the 0.68-meter (27-inch) Schmidt telescope of the Catalina Sky Survey in Arizona, and it won’t get much brighter than that.

“Certainly 6R10DB9, with a geocentric eccentricity less than 1, is currently orbiting the Earth ,” says Gareth V. Williams of the Minor Planet Center, “although it will leave the Earth-Moon system after next June’s perigee.” Williams’s calculations show that prior to capture 6R10DB9 was in a low-inclination orbit around the Sun with a period of about 11 months. That’s typical of the paths followed by spent rocket boosters left over from space missions of the 1960s and 70s. 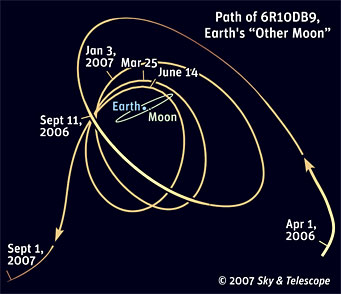 When Earth is viewed from the direction of the constellation Aries, asteroid 6R10DB9 is seen drifting up to our planet, making three complete loops, and then meandering off again. To help in visualizing the trajectory, parts of the path closer to the observer have been made “brighter.” The four dates nearest Earth are those of successive perigees. This plot is based on an ephemeris generated by the Jet Propulsion Laboratory”™s Horizons software.

But if 6R10DB9 is the hollow shell of a spent spacecraft, it would be vulnerable to solar radiation pressure and exhibit noticeable changes in its orbit. Bill J. Gray of Project Pluto has analyzed 111 positional measurements made at eight observatories, including those of amateur astronomers James McGaha in Tucson, Arizona, and Peter Birtwhistle near Swindon, England. Gray finds that 6R10DB9 is behaving more like a rocky body than space junk. “I hate to say this, because it seems so implausible,” Gray comments, “but this looks a heck of a lot like a natural object.”

Still, Alan W. Harris (Space Science Institute) sounds a cautionary note. “Claiming some bit of fluff in a temporary looping orbit to be a ‘satellite,’ with all the baggage that term carries, is mere hype,” he warns. “To find a natural body in a stable Earth orbit would be a real coup. About the only place it could come from is the Moon.”

When 6R10DB9 makes its final and closest pass in June, “threading the needle” and dipping just inside the Moon’s orbit, astronomers will get their best view of it for years to come. Spectroscopic studies with large telescopes, for example, could help to reveal its true nature.