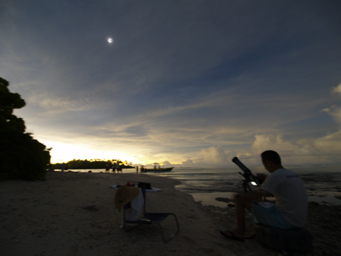 The July 22, 2009, total eclipse of the Sun was a late-afternoon spectacle for the Ring of Fire group on the islet of Ouba, at latitude 2° north in Kiribati.

Naked-eye prominence! That was my biggest surprise while watching the July 22nd total solar eclipse from the islet of Ouba with a select group from Ring of Fire Expeditions. We'd arrived that morning in a small boat from Tarawa, the main atoll of Kiribati (the Gilbert Islands).

Few other reports I've seen make any mention of this hot-pink prominence, which was so striking on the Moon's left edge to me with 4x binoculars and to three others in our group with no optical aid at all. But we were well south of the centerline of totality. Maybe the oversize lunar disk at this long-duration eclipse concealed it from observers nearer to the centerline.

How we wound up at Ouba is a story in itself. A ferryboat out of Tarawa had tragically capsized on July 13th, prompting the Kiribati government to cancel all ferries indefinitely — including the one we were going to take from Tarawa to Butaritari. Last-minute scrambling by our tour guide, Shayne Jarosz from Military Historical Tours, and expedition leader Jacques Guertin saved the day. It turned out that Sonya at Tarawa's Otintaai Hotel had an uncle, Emil, with a boat that On eclipse day the expedition waded ashore on Ouba, since the islet has no dock.

could easily handle our 14-member group. Emil also ran a getaway resort on Ouba, some 30 miles north of Tarawa, where we could set up and enjoy a midday repast on the previous night's tuna catch. Jacques and I recalculated the eclipse for that location and found we'd still have 2m 22s of totality, plus the benefit of a tropical beach for our tripods. Our Plan B was rolling! Sharon and Billy Hahs of Chicago brought along a set of Sears paint chips to match the sky color during totality. Based on that and other careful notes, Billy later made two watercolors to document the eclipse.

Skies weren't quite crystal clear for us; some cirrus limited what we could see of the outer corona. But the cirrus enhanced our experience in unexpected ways. Just before totality, with the Sun 38° up, a faint 22° ice halo appeared in the cirrus, creating a bull's-eye effect. Yasushi Hirota and Mihyangja Bang of New York switched on a tripod-mounted camcorder that captured the Moon's shadow approaching in the sky, then all of totality, and finally the Moon's shadow receding again — plus their own animated silhouettes working other cameras in the foreground.

In the minutes leading right up to totality, I looked closely for any sign of shadow bands rippling across the white sand. No dice. 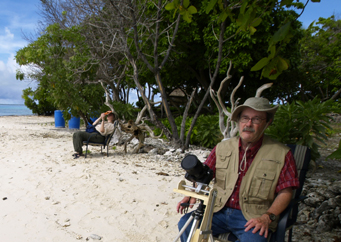 Rather than rely on batteries, Roger Sinnott set up this camera tracker powered by a wind-up kitchen timer.

For longtime eclipse chaser Dick Mischke of San Antonio, Texas, this was a return trip to Kiribati after 66 years. As a pilot in the U.S. Army Air Forces during World War II, Mischke had flown his Lockheed P-38 to Tarawa just a month after the Marines made their historic amphibious landing there on November 20, 1943. "I still can't get over the friendliness of these islanders," he said. "They have so little, yet they appear so happy and contented in their lives."

What had seriously imperiled the Marines' 1943 assault was a tide that failed to rise as high as expected. As a result, the Higgins boats from the Navy transport ships had to discharge men hundreds of yards from shore, leaving them no choice but to wade in under withering fire from well-entrenched Japanese shore batteries. According to military historian Col. Joseph H. Alexander, the tide's mysterious behavior that day lacked scientific interpretation until Donald W. Olson (Texas State University) published his seminal essay on the astronomical factors at play in Sky & Telescope (November 1987 issue, page 526).