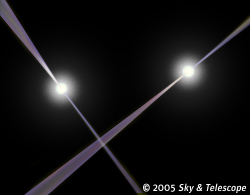 A binary pulsar system provides an excellent laboratory for testing some of the most bizarre predictions of general relativity. The two pulsars in the J0737-3039 system are actually very far apart compared to their sizes. In a true scale model, if the pulsars were the sizes of marbles, they would be about 750 feet (225 meters) apart.

Albert Einstein's 90-year-old general theory of relativity has just been put through a series of some of its most stringent tests yet, and it has passed each one with flying colors. Radio observations show that a recently discovered binary pulsar is behaving in lockstep accordance with Einstein's theory of gravity in at least four different ways, including the emission of gravitational waves and bizarre effects that occur when massive objects slow down the passage of time.

An international team led by Marta Burgay (University of Bologna, Italy) discovered the binary pulsar, known as J0737–3039 for its celestial coordinates, in late 2003 using the 64-meter Parkes radio telescope in Australia. Astronomers instantly recognized the importance of this system, because the two neutron stars are separated by only 800,000 kilometers (500,000 miles), which is only about twice the Earth–Moon distance. At that small distance, the two 1.3-solar-mass objects whirl around each other at a breakneck 300 kilometers per second (670,000 miles per hour), completing an orbit every 2.4 hours.

General relativity predicts that two stars orbiting so closely will throw off gravitational waves — ripples in the fabric of space-time generated by the motions of massive objects. By doing so, they will lose orbital energy and inch closer together. Radio observations from Australia, Germany, England, and the United States show that the system is doing exactly what Einstein's theory predicts. "The orbit shrinks by 7 millimeters per day, which is in accordance with general relativity," says Michael Kramer (University of Manchester, England), a member of the observing team.

In 1993, Joseph Taylor (Princeton University) and Russell Hulse (Princeton Plasma Physics Laboratory) shared a Nobel Prize in physics for discovering another binary pulsar system that eventually demonstrated the same effect. But the orbital period of J0737–3039 is one-third that of the Taylor–Hulse system, which makes relativistic effects easier to see.

In the recently discovered binary-pulsar system, the pulsar's elliptical orbit changes orientation by about 17 degrees per year due to the space-warping effects of general relativity. For clarity, this illustration greatly exaggerates the effect as well as the orbit's elliptical shape.

The observing team has also measured another change in the binary pulsar's orbit, and found it to be consistent with the predictions of general relativity. The periastron (the point in the two pulsars' orbit where they come closest) advances a whopping 17 degrees per year, which is the largest ever observed. That rate is four times higher than the rate in the Taylor–Hulse system, and 140,000 faster than the relativistic advance of Mercury's orbit around the Sun.

The team has also observed a strange prediction of general relativity that clocks will run slower when closer to a massive object. When one pulsar approaches its partner's intense gravitational field, its rotational period appears to slow down by as much as 0.38 millisecond.

Another observation supports Einstein's prediction that massive objects warp space-time. When one pulsar passes behind the other and its signal travels through the warped space-time created by the foreground pulsar, this adds a 90 microsecond delay to the arrival of its signal. "The effect has been seen in a handful of pulsars before," says Kramer. "But we've never had a system that had an inclination angle so close to 90 degrees. With its 88-degree angle, we are very fortunate to see this system almost perfectly edge-on."

"All in all, this binary pulsar is turning out to be a spectacular gravitational testbed," says independent commentator Scott M. Ransom (National Radio Astronomy Observatory). Pulsars are the collapsed cores of massive stars that exploded as supernovae. These stellar remnants rotate with extreme regularity, and their pulsed radio emission makes these dense objects virtually perfect clocks for measuring subtle gravitational effects.