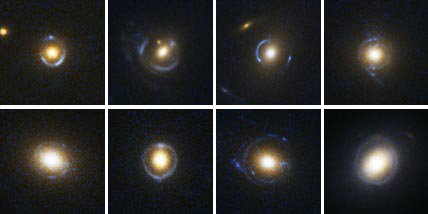 The Hubble Space Telescope snapped these images of eight newly discovered lensed galaxies that each displays what astronomers call Einstein rings. This unique type of gravitational lensing reflects the light of a distant galaxy positioned perfectly in line with the foreground galaxy so that the gravitational warping of the light occurs in the shape of a blue ring.

When you drop a piano on a cartoon character's head, what does he see? Stars, right? But what happens when you drop an ambitious sky survey attempting to map more than 100 million celestial objects on astronomers' desks? They see rings! Eight new Einstein "rings" have been discovered in the Sloan Digital Sky Survey (SDSS), adding to the three previously seen in the visible universe.

The SDSS uses a custom-made 2.5-meter telescope housed at Apache Point Observatory in New Mexico to map a quarter of the sky with unprecedented detail. After searching through the Sloan database for potential lensed-galaxy candidates, a team of astronomers led by Adam Bolton (Harvard-Smithsonian Center for Astrophysics) and Leon Koopmans (Kapteyn Astronomical Institute, The Netherlands) used NASA's Hubble Space Telescope to take a closer look. They found 19 new gravitationally lensed galaxies — 8 of which display Einstein rings.

Einstein rings are a special type of gravitational lensing, a phenomenon predicted by Einstein's general theory of relativity. The gravity of a whole galaxy can warp and bend light in a different direction. That's what we see with gravitational lensing. The light of a distant galaxy warps around a foreground galaxy, and, in the case of Einstein rings, the galaxies are positioned perfectly in line so the light bends around the galaxy in all directions, forming a circle.

Seeing this optical illusion in so many lensed galaxies leads astronomers to think that this might be a common, as well as useful, phenomenon. The position and amount of warping the light experiences can then be used as a precise scale to weigh the mass of the closer object. This unique way of measuring galaxies and detecting dark matter may prove that seeing rings can be just as valuable as seeing stars. The team's initial findings appear in an upcoming issue of the Astrophysical Journal.

The Sloan survey continues to pop out rare astronomical jewels. By searching the archives, Xiaohui Fan (University of Arizona), and an international team of astronomers, have identified 7 new quasars, adding to the 12 quasars the team had previously discovered in the catalog since 2003. However, since the Sloan database covers only roughly ¼ the observable sky, it's clear that there are still many more gems to uncover.