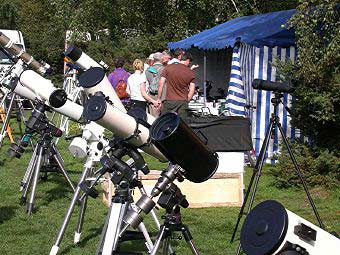 Telescopes aplenty — that was the scene at the 2006 Autumn Equinox Sky Camp.

The 12th annual Autumn Equinox Sky Camp took place from September 16th to 24th at the Kelling Heath Holiday Park in North Norfolk, England. Jointly organized by the Loughton Astronomical Society and the Society for Popular Astronomy, the event has grown rapidly in popularity during recent years. This is mainly due to the superb dark skies to be had in this rural part of Norfolk County, some two miles from the North Sea. But the venue's excellent camping and caravanning facilities and picturesque location also make it an ideal family holiday destination.

Being a nine-day event, there were plenty of opportunities for keen observers to dodge the rain to view and image under largely moonless conditions. Particularly noteworthy was the night of September 22nd, when the 400 or so attending astronomers enjoyed excellent transparency from dusk until dawn. Fortunately for H-α-light enthusiasts, the daytime weather was often fine, and a considerable number of solar telescopes were pressed into service. Saturday, September 23rd, saw many day visitors swell the ranks, keen to sample the bargains offered at the hugely popular stands provided by a dozen companies.

All those who attended deemed the event a huge success, and Kelling Heath has already received many advance bookings for a repeat performance in 2007.