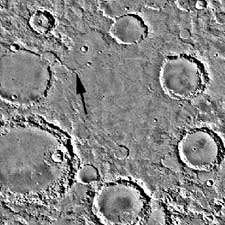 When Mars was a youngster, it was a far different place. The now dry and frigid world was arguably warmer and had flowing water on its surface. It was also a pock-marked teenager, with active volcanoes and deep impact scars. But today there is little evidence of the red planet's youth. And if a team of astronomers are correct, it is because Mars has literally buried its past.

As a child, Mars formed an intricate drainage system to channel its water. During this period, which ended roughly 3 billion years ago, impacts were relentless as space debris bombarded the planet. The oldest geological formations on Mars hark back to this violent period. But time has managed to erase most of the wounds. Craters smaller than about 30 kilometers aren't found in the numbers expected, and astronomers believe that most of these ancient impact sites have long since eroded away.

Explaining these missing craters is difficult because the sparse and disconnected small drainage systems visible on Mars today couldn't have carried enough water to cause all the erosion. According to Ted Maxwell (National Air and Space Museum), "The lack of small tributary channels in the Martian Highlands has been a continuing problem for interpreting whether rainfall or subsurface water was responsible for the many larger channels."

If water from rain was responsible for many of the observed erosion features, small drainage networks must have existed in higher numbers in the past. This implies that something filled in and eroded away both the small craters and the minor drainage systems.

New work by Ross Irwin (University of Virginia) and Maxwell, presented at last month's Sixth International Conference on Mars in Pasadena, California, finds that the combination of drainage systems and cratering effectively redistributes the surface and creates much of the observed erosion. Impacts throw material into the air, which falls into surrounding craters and valleys. Drainage systems carry debris in streams, removing it from one place and building it up in another. This redistribution, combined with other forms of erosion such as wind-blown dust and landslides, efficiently fills in and buries the small drainage systems and erases small craters.

"In the early Martian environment, craters and rivers were competing for supremacy in sculpting the surface," says Maxwell. Together, these two forces created a dynamic world that is slowly revealing its secrets to Earthbound scientists.