Eta Carinae is one of the weirdest stars in the Milky Way. It shines with 5 million times the Sun’s luminosity and spits out the equivalent of Jupiter’s mass in its stellar wind each year. (The Sun would unravel itself in a millennium if it spewed out so much stuff.) It’s also one of the galaxy’s most massive stars at roughly 100 solar masses — even after its “Great Eruption” in the 1840s, in which it ejected at least 10 times the Sun’s mass into space. 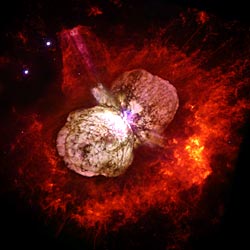 Hubble image of the Homunculus Nebula around Eta Carinae. Both Eta Car and its possible companion hide deep inside at the central whitish dot. From wind interactions, astronomers peg the companion to glow at least 20,000 kelvins hot â€” even hotter than the estimated minimum for Eta Car of 15,000 kelvins. The Sun is just under 6,000 kelvins at the photosphere.

There’s something strange going on with the light that travels 7,500 light-years to us from Eta Car, too. Changes in the star’s spectra are heralding a significant event in January 2009, which may settle once and for all whether Eta Car has a massive, unseen stellar companion.

Eta Car’s spectra undergoes a 5½-year cycle. Since Augusto Damineli (University of São Paolo, Brazil) first discovered it more than a decade ago, scientists have argued over why this regular period exists. Most now favor an undetected stellar binary companion as the instigator — the key word there being undetected. Astronomers have never managed to find it because the Homunculus Nebula surrounding Eta Car prevents good observations and Eta Car itself is so bright that it blinds instruments to anything nearby.

Equally peculiar is that the star’s X-ray emissions abruptly disappear for a few months during every cycle. This drop happens with a disturbing regularity, recurring as predicted in 1997 and 2003. As the next “X-ray crash” approaches this January, a team led by Kris Davidson (University of Minnesota) has confirmed an unusually intense line in Eta Car’s spectra using the 8-meter Gemini South telescope in Chile. The scientists suggest that the feature supports the binary-companion theory and also may indicate additional mass ejection from the star.

Specifically, the astronomers detected an increased intensity in a line they think occurs when a helium atom has first lost both of its two electrons and then regains one. There are multiple energy levels within an atom at which an electron can exist, and as this captured electron falls down to a lower energy level from a higher one it emits light with a very particular wavelength, which scientists measure as a spectral line.

Often these “recombination lines” appear in spectra from stars with very hot, strong stellar winds. Yet for many years, Eta Car observers didn’t see He II features (He II is helium missing an electron). When they finally did spot a He II line in 2003, the line was strongest around the time of the X-ray drop, says team member John Martin (University of Illinois at Springfield) — and is the exact same line the astronomers see now.

Scientists still don’t know how much of Eta Car’s weirdness results from the star’s intrinsic properties and how much from the influence of its presumed companion. The X rays themselves may arise from a shock front created when Eta Car’s wind collides with that of its unseen companion. As it travels around the primary in a highly elongated orbit, the companion star’s wind carves out a three-dimensional version of a speedboat’s bow shock, explains Michael Corcoran (NASA/Goddard). The high energies produced in this collision suggest that both winds are hot and dense and that the companion is a massive, hydrogen-burning O star — although nowhere near as heavy as Eta Car. 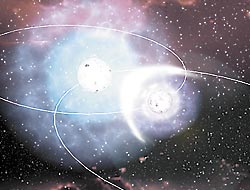 Artist's concept of Eta Carinae as a binary star of two hot, blue supergiants. The thick white arc at center marks the X-ray emitting shock front that wraps around the less powerful of the two stars.

So why do these X rays periodically disappear? Nathan Smith (University of California, Berkeley) suggests that as the companion swings close by Eta Car, it disrupts the primary’s stellar wind. This event throws Eta Car’s outflow into chaos, and it takes a few months to rebuild itself.

Another possibility is that the thick, slower wind coming off Eta Car’s equatorial region engulfs the companion star at its closest approach, says Corcoran. It’s rather like how the bow shock bends around the speedboat when it makes a fast turn.

But the strong He II emission hints that there’s something else going on besides the winds’ crash, Martin says. “In order to get this kind of He II line, you need to ionize helium twice, which takes a lot of energy.” And although X rays are highly energetic, Martin and his colleagues don’t think the winds’ collision emits enough energy to completely explain the spectral features.

Martin suggests that higher energy levels could arise if Eta Car throws off a lot of material from its equator as the companion approaches. This material would impact the shock front, boosting the clash’s effect. And indeed you would expect a rapidly spinning object to fling material off at its equator, says Smith. But it remains unknown whether the companion’s close passes have some tidal influence on Eta Car’s abnormally high rotation speed. 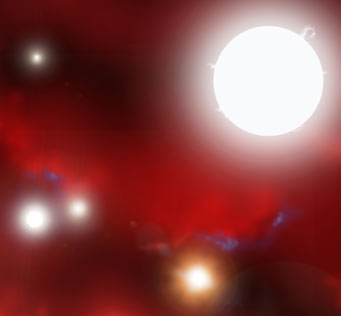 Artist's impression of the primordial gases illuminated by the light from massive early stars. Yoshida and Hernquist's models trace the collapse of massive gas clouds into gigantic protostars like these.

Eta Car also tantalizes those who model star formation in the early universe, since scientists think that such enormous stars peppered space at that time. Naoki Yoshida (Nagoya University, Japan) and Lars Hernquist (Harvard-Smithsonian Center for Astrophysics) recently presented results from computer models suggesting that stars 100 times the Sun’s mass appeared early after the Big Bang and formed relatively easily. As few stars currently exist on such a scale (compared to the number of less massive stars), observations of Eta Car may elucidate the hows and whys of those first giants. The team’s paper appears in last Friday’s Science.

If Eta Car behaves in January 2009 like it has in the past, dissidents from the binary theory will probably have to surrender. Yet the star could also surprise everyone. The companion might trigger another Great Eruption, for example — we still don’t know if it set off the last one. And with such a high mass, Eta Car may go supernova in the near future. If it does, it may deprive scientists of solving its mystery forever.

I'm confused by the discussion in the fifth and ninth paragraphs about He II. Astronomers use the notation of spectroscopy to describe the ionization state of an ion. Consequently, neutral helium is He I, He II is singly ionized helium (one electron removed), and He III is doubly ionized helium (both electrons gone leaving a bare nucleus that is an alpha particle). The wavelengths of the radiation being considered are not given, so I cannot know whether it is He II or He III that is being discussed, and, in fact, there would be no lines from He III because there are no electrons in bound states for He III.

Actually that's something that confused me as well. I contacted the observer regarding his statement and have now updated the article accordingly. Thank you for commenting.

I like reading your slightly irreverent reports, Camille. I think you may have a future as a popularizer of astronomy in the same way Carl Sagan was. Keep up the good work!

What are the chances of both stars being Wolf-Rayets with interacting winds. W-Rs are known to be some of the hottest stars around with plenty of hi-energy ionizing radiation. I know current spectra do not support this theory, but with orbit geometry and/or obscuring matter 'hiding' a dual W-R spectrum, might this model still be plausible? I look forward to future observations of this enigmatic object. Thanks for the detailed article on what may be the next supernova in our Milky Way galaxy.

Me, Myself, and I

Would its magnitude change? Would you be able to see something with a telescope? And, what would it look like if it supernovaed? (odd word, i know)

Wonderful article. Congratulations! Eta Carinae has attracted my attention long time ago :). I marked the January event on may calendar. Looking forward to read more about this story.