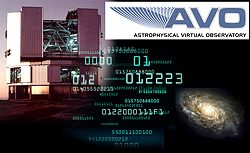 During a press conference held at Jodrell Bank Observatory in the United Kingdom on January 20th, journalists, astronomers, and potential European Union financial backers got a real-time demonstration of the prototype Astrophysical Virtual Observatory (AVO) software. The groundbreaking event marked the conclusion of the first year of the project; the goal is a fully functioning European VO by the end of 2007.

What is the Virtual Observatory, and why do astronomers want it?

Astronomers are constantly generating vast amounts of digital imagery and data. A recent estimate from John Hopkins University suggests that within a decade, sky surveys at many wavelengths will produce more than 10 million gigabytes (10 petabytes) of data per year. Moreover, vast amounts of valuable old data and images are scattered around the world where most astronomers cannot find them. The intent of the Virtual Observatory is to combine all this data into a form easily accessible to any astronomer. Ideally, you could go on the Internet, aim a "virtual telescope" to any spot on the sky, and see every image ever taken there at every wavelength, with every piece of information about the objects in view attached. You could run an "Astro-Google" search to find any significant astronomical observation ever done. 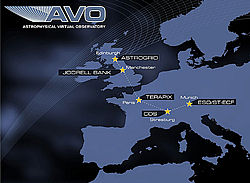 Huge hurdles stand in the way. The amount of astronomical data being gathered doubles about every 12 months, while computing power doubles only about every 20 months; clearly a logjam looms. Moreover, these large databases need to be archived and made accessible through standardized data formats, wide-bandwidth networks, and state-of-the-art software tools.

Clearly this needs to be an integrated, worldwide effort; the European project is just one part. In June 2002 the International Virtual Observatory Alliance (IVOA) was founded to facilitate global coordination between the European network and those being developed in the U.S. (whose project is called the National Virtual Observatory) as well as Canada, South America, Australia, Japan, China, India, and Russia.

The first 'International Demo' of the IVOA's capabilities looks set to be staged at the International Astronomical Union meeting in Sydney, August 2003. These projects will cost an estimated $27 million (25 million €) over the next 3 to 5 years. All those concerned are under no illusions that it will be easy; hence the need to establish rigorous standards at the outset.

At the Jodrell Bank press conference, Piero Benvenuti (European Space Agency) spoke of astronomy's pioneering record among sciences in adopting a high level of standardization. For example, within the past year VO architects agreed upon an international data-exchange format named VOTable. This work should have wide application; processing of vast, disparate data sets is a common problem among other disciplines, such as genomics, as well as in the commercial world. 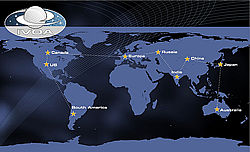 The AVO is a part of what will eventually become a global network called the International Virtual Observatory Alliance. Europe will therefore be joined by Australia, Japan, China, India, Russia, Canada, the US, and South America.

In the not-too-distant future, software tools will start giving schools and the general public access to this astronomical treasure-trove of information. In a few years, an important new branch of amateur astronomy may exist: "mining" for unnoticed discoveries in data never before inspected by human eyes.

The only casualties may be those archives that are currently non-digital. These include the world's various photographic plate archives dating back to the late 19th century. Whether the funds will be found to scan and process these precious and deteriorating records of the pre-computer age, amid the race to cope with a torrent of modern data, remains to be seen.

For more information, check the AVO or IVOA Web sites.