Europe's Mission to the Moon 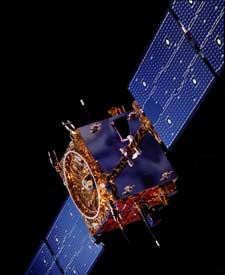 The European Space Agency's SMART 1 spacecraft will use its ion engine to move very slowly into a lunar orbit. Once there, it will map the Moon and search for ice near the Moon's poles.

The European Space Agency (ESA) embarked on its first mission to the Moon on September 27th with the successful launch of SMART 1, the initial satellite in ESA's Small Missions for Advanced Research in Technology campaign. The craft is not only designed to reveal secrets of our faithful companion; SMART 1 is also a platform for testing ESA's new spacecraft technologies. Among the advances are a deep-space navigation system and a laser communication link. A solar-powered ion engine will propel the satellite, much like NASA's Deep Space 1 Mission which flew past Comet Borrelly in 2001.

Fighting delays since August, the 816-pound (370-kilogram) lunar probe finally left the French Guiana spaceport at 23:14 Universal Time aboard an Ariane V rocket. Once deployed, the compact (1 cubic meter) satellite will begin an exceptionally slow spiral away from Earth due to the very weak, though very fuel-efficient, ion propulsion system. SMART 1 won't reach the Moon until January 2005, whereas the Apollos took just over three days to reach a lunar orbit using conventional rocket technology.

ESA has high ambitions for the spacecraft once it reaches our nearest neighbor. The lunar probe will spend six months conducting extensive surface contour mapping and mineral/element distribution surveys. Its ultimate goal is to end long-standing debates as to the origin of the Moon and the existence of water in lunar polar craters.