Scientists have devised a new way to dim starlight's blinding glare, a technique that improves on existing technologies to allow astronomers a clearer view of exoplanets orbiting nearby stars.

Of the 952 extra-solar planets discovered to date, nearly all have been located indirectly, inferred from irregularities in observations of a host star: The gravitational tug of an orbiting planet causing a subtle change in a star's movement, or a planet passing between a star and us dimming a star's brightness in a characteristic way. 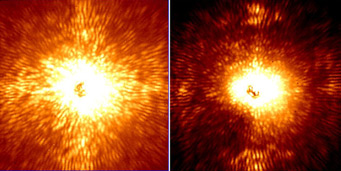 These images both show HD 157728, a star about 1.5 times the size of the Sun. The picture at left showcases the bright, speckled background left over by traditional coronagraphs. The right image is dimmed by Project 1640's adaptive optics system. Scientists hope to find exoplanets lurking in the darkest areas of similar images.

But astronomers have directly imaged less than 2% of the known exoplanets. Stars' incredible brilliance washes out anything nearby, rendering planets and other small objects nearly invisible. It's like "trying to see a firefly whirling around a searchlight more than a thousand miles away," says astronomer Charles Beichman (California Institute of Technology). But a team of scientists working with the 200-inch (5.1-meter) Hale telescope at the Palomar Observatory in California have assembled a system that filters out most of that light, a new technique they expect will give them unprecedented views of planets orbiting nearby stars.

The system, called Project 1640, consists of four parts: a coronagraph, an opaque mask that blocks direct starlight; a sensor, embedded in the coronagraph, that detects imperfections in the light's path; a spectrograph that can differentiate between light from a star and light from a planet; and an adaptive optics system that makes millions of adjustments every second to filter the light the coronagraph leaves behind.

While the coronagraph blocks nearly all of a star's light, about half of one percent of that light remains in the form of a bright, speckled background, says Project 1640 principal investigator Ben Oppenheimer (American Museum of Natural History). These speckles, though dimmer than the original starlight, are still hundreds of times brighter than a young planet's infrared radiation. 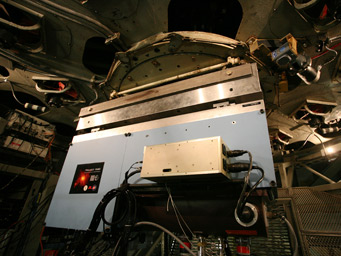 The Project 1640 apparatus is mounted at the focus of the Hale telescope. The system focuses the light gathered by Hale's 200-inch primary mirror onto smaller mirrors, where it is corrected and dimmed.

The system's adaptive optics separates starlight from a planet's soft glow, and makes adjustments to dim only the starlight. It does this by making tiny modifications to the shape of two 6-inch (152-mm) mirrors mounted beneath Hale's primary mirror. The new system has in total 3,629 actuators mounted on the backs of the mirrors — 3,388 actuators on one, 241 on the other — which is about ten times as many actuators as are on the Keck II telescope. Each actuator can adjust to a precision about the width of a few potassium atoms. All told, the mirrors can change shape more than 7.2 million times every second.

The Project 1640 team has just begun 99 nights of observing, which will be spread out over the next three years. The system's masking coronagraph will block the view of the common "hot Jupiter" exoplanets, which orbit their stars very closely. The project instead will search for planets 5-100 a.u. from their host star — which, depending on the type of star, could be inside the "habitable zone" where life has the potential to arise.

For a trial run, Oppenheimer and his team imaged the star HD 157728 in the constellation Hercules, about 140 light-years away. It is one of some 250 stars the team plans to study, all of them young, bright and relatively close, no farther than 200 light-years distant. The stars' youth implies that any planets the team finds will also be young, still retaining the remnant heat of their creation.

The spectrum of a planet’s radiation, Oppenheimer says, will reveal characteristics such as its color and atmospheric makeup. Such data, he says, will be invaluable in the hunt for life outside our solar system.

Oppenheimer presented the group's initial findings at the annual meeting of SPIE, the International Society for Optical Engineering, in Amsterdam last week.

(Fun fact: 1,640 nanometers is the wavelength of light at which Project 1640 gets the best starlight suppression. "There is an endless procession of acronyms in this business," says Oppenheimer, who named his project in an effort to buck that trend.)

I hope to read future reports of directly imaged exoplanets from Project 1640 at S&T. The exoplanet URL provided at the start of this report currently list 32 exoplanets in the range of 5-100 AU from their host stars. The masses are large, many of the 32 run 2-31 Jupiters. With imaged exoplanets and more documented, perhaps better orbital and mass constraints will be reported too.

I agree Rod. Stephen, as a person who avidly follows new planet discovery anouncements I was surprized by the 952 extra solar planets count reported in the first sentence of your article. When I clicked on the link you provided and pulled up Exoplanet.eu's Catalog it still shows 777 planets. Is the 952 correct? If so the reference dosn't seem to support your claim, or am I missing something?

Bruce, I will try and answer your question about the exoplanet count at the .eu URL. The 777 are those which are not disputed. If you look at the drop down, there is a disputed or unconfirmed list, quite a few on that table too. Remember NASA Kepler back in Mar/2012 updated their objects of interest or KOIs to 2321 possible exoplanets. http://kepler.nasa.gov/ is the home page and 74 of those 2321 are considered confirmed. Hope this helps.

Thanks Rod, it clears things up nicely. The results from this new opitcal system should pull the average orbital distance out a bit. It would be nice to find lots of gas giants out where they belong, IMO.

Sorry, gentlemen -- I'm a little late to the party. Yes, I was trying to cast as wide a net as possible, accounting for all the detection methods.

Bruce, I agree that it would be nice to see some hot Jupiters "where they belong" -- and even nicer to see some super-Earths in the habitable zone. This technology seems to have the potential to do both. There are a fair number of restrictions on the kinds of systems Project 1640 can probe (nearby, young stars, young planets), but it'll be interesting to see what use scientists make of it.