Back in the mid- to late 1990s exoplanet discoveries trickled out slowly: perhaps one every few months. Each one was greeted with headlines and euphoria. Nowadays, with the count at 424 known planets outside our solar system, the bar is much higher. We certainly know that plenty of planets exist. The burning questions now center around the physical characteristics and environments of these distant worlds, and what we can learn from their overall statictics, and whether other planetary systems resembling our own solar system are common or rare. 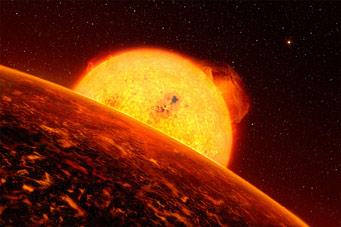 A lava planet close to a dwarf star near the bottom of the main sequence; artist's concept.

With this backdrop, multiple teams announced new exoplanet results at the 215th American Astronomical Society meeting, held last week in Washington, DC. With more than 3,400 registrants, the meeting was the largest in AAS history and in fact was the largest gathering of professional astronomers in world history.

Project scientists for NASA's Kepler mission announced a first batch of exciting results at the meeting's start. Then at a press conference a couple days later, five other teams described new exoplanet results of their own: 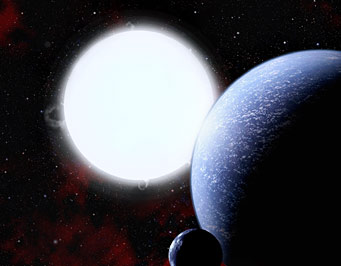 A B star, near the top of the main sequence, with a super-Earth waterworld and its Earth-like moon; artist's concept. The star is not to scale. In reality, a planet with liquid-water temperatures would have to be so far from a star as hot as this that the star would appear much smaller in its sky than the Sun appears from Earth.

Massive host stars. A group led by Xavier Koenig (Harvard University) used the MMT Telescope in Arizona to survey disks around big young stars having 1.5 to 15 times the mass of our Sun. These will settle down to be hot shiners of spectral types F, A, and B once they're finished with their birth processes. Koenig and his colleagues found that disks around such stars are plentiful, and that the disks' infrared signatures indicate that planets commonly form around massive stars.

Such hefty stars don’t live long enough to support planets that could develop advanced life (assuming the process takes as long as it did on Earth). But it's now clear that planet formation is a robust process that occurs around stars over essentially the whole range of stellar masses, from the bottom to the top of the main sequence: from dim red M dwarfs to hot, blue-white B dazzlers. More information.

Weird disk stuff. Carl Melis (University of San Diego) led a group that found a planetary-debris disk around HD 131488 in Centaurus, a young star about 10 million years old with three solar masses. The dusty debris forming the disk almost certainly came from a collision between more-or-less planet-sized bodies, as happened in our own young solar system. That's no big news these days; many other cases have been found. But observations taken with the Gemini South Telescope in Chile show that this particular disk differs considerably in composition from those seen around other stars.

Most debris disks (when infrared spectral signs of their composition can be seen) turn out to be rich in olivine, pyroxene, and/or silicate minerals, just like meteorites from our early solar system. But the stuff in the disk around HD 131488 bears no apparent resemblance to such material. Its composition remains unknown. In addition, this star is also the first to show both warm debris dust near the star and cold primordial dust much farther out. More information.

Super-volcanic planet from hell. Rory Barnes (University of Washington) announced more news about the only exoplanet known to be rocky in composition, Corot-7b: a super-Earth with Earth's density and about 5 times Earth's mass. This planet orbits so close to its star, a yellow-orange dwarf, that its surface should be roasted to be about as hot as molten lava (Sky & Telescope cover story, May 2009).

In addition, said Barnes, the planet probably has extremely active volcanism, due to strong internal heating as well. It orbits its star at only 1.6 million miles (1/60th the Earth-Sun distance) and completes an orbit every 20.5 hours. If the planet’s orbit is even very slightly elongated — which is quite likely given the presence of a second planet, whose mass should perturb the orbit — then Corot-7b will be tidally squeezed and flexed once per orbit. Internal friction will dissipate some of this tidal energy, heating the planet’s interior just as Io's slightly eccentric orbit around Jupiter gives rise to tidal flexing and vigorous volcanism. But in the case of Corot-7b, the effect should be many times greater.

Bare core of a gas giant? Speaking of Corot-7b, Brian Jackson (NASA/Goddard Space Flight Center) presented a study showing that this “planet from hell” is probably losing significant mass under the heat blast of its star. It could be shedding half an Earth mass every billion years. Extrapolating backward in time, Jackson concludes that the planet may have started as a gas-giant world more akin to Jupiter or Saturn, and that its light elements were driven off. In other words, this and perhaps other hot super-Earths could be the rocky remnant cores of former gas giants. More info.

Frequency of familiar solar systems. Scott Gaudi (The Ohio State University) presented results of his own team’s search for planets by looking for cases of gravitational microlensing of distant background stars, an effect predicted by Einstein’s general theory of relativity. The team’s recent collaboration has found signs of six planets by this method, including one system with two planets at least roughly analogous to Jupiter and Saturn.

Gaudi noted that if all stars hosted planetary systems similar to our own, the team should have found more planets out there, and in particular more multi-giant-planet systems. Based on these early statistics, Gaudi argues that roughly one-third of stars host at least one giant planet in a distant orbit, and roughly one-sixth of stars have multiple giant planets in distant orbits as the Sun does. Given the 200-billion-plus stars in our galaxy, that means the Milky Way is home to tens of billions of planetary systems that at least superficially resemble ours.

These statistics are still rough. But they also imply that in most planetary systems that exist at all, giant planets do not migrate inward through the star's habitable zone, as has happened in so many of the easily discoverable systems that have been found so far. This is good news for the survival of terrestrial planets capable of forming life.